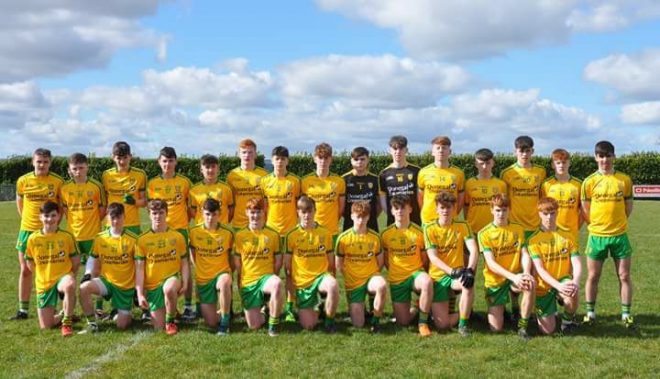 By Frank Craig
Donegal U16s take on Monaghan tomorrow in Letterkenny with a place in the Buncrana Cup decider up for grabs (Throw-in, 1.30pm).
The Farney boys have already denied Donegal in the U17 Jim McGuigan Cup final this term with a dominant win over the young Tir Chonaill lads last weekend.
There is a crossover between the two young Donegal squads so a familiarity of sorts will exist. Rory Kavanagh can call on the services of four of those U17s in the form of Senan Rooney, Daithi Roberts, Jamie Grant and Eric Carr.
Donegal secured their place in the last four with a dominant 1-10 to 0-2 dismissal of Armagh last time out. St. Naul’s clubman Brian McCabe is part of the 2012 All-Ireland winner’s backroom team.
He said: “We beat Down in Newry first time out. We’d another good win then over Armagh. The competition is split up into three groups of three. We won our section and went straight through to the semis.
“There was a qualifier blitz last Saturday. Monaghan came out of that so their tails will definitely be up.”
McCabe feels the recent McGuigan Cup final result will have little influence or bearing on tomorrow’s clash.
“Not really,” he said. “It adds a little interest to it surely. To be fair to Monaghan they’ve been the form side in the Buncrana Cup over the last few years. They’ve won it as many times as anyone else over the last five or six years.
“They are doing a lot of work at underage. We’re under no illusions of the task we’re up against. If we can get to the level where we believe the boys can get to then we’ll not be too far away.”
McCabe admits he’s been really impressed with how boss Kavanagh has taken to his new role in the dugout. His approach is calculated and his delivery of instruction, McCabe adds, is very measured.
“I’ve been very impressed,” he continued. “He takes so much experience to the table. What he’s won, the games he’s played in too; you can see it all sinking into the lads’ heads whenever he speaks.
“Rory will often reference the bad experiences he’s had too on a football pitch. The importance of application and working hard; that Donegal side he was part of went through all of that. There were lows as well as the highs. Talent is one thing but you have to apply yourself to the best of your ability to fulfil your potential.
“That’s what he impresses upon them. It’s a very enjoyable environment to be part of. The players really have taken to him. He has that personality. It’s great that someone like him has got involved. The same goes for the likes of Eamon McGee (U20s) and Karl Lacey (seniors).”
Donegal U16s didn’t get going until March 24 with the weather holding up the throw-in to their season. With the U17s also running simultaneously alongside their campaign, it’s taken a little bit of juggling to accommodate both set-ups. McCabe though, says the excellent working relationship between the respective management teams meant that it hasn’t really been that big of a deal.
On that working relationship, he said: “To be fair, Gary Duffy the U17 manager was very good. There was constant communication and cooperation both ways.”
U16 or development level is, McCabe says, designed to softly introduce young players to what being part of a county set up entails. Many of the group will go on to represent Donegal at U17 next season and they need to be prepared for the rigors of that jump.
“It’s a learning curve for the boys,” he adds. “At the minute we believe these are the best U16s in the county. We hope most of them will be back involved with the U17s next season. There are no guarantees. Even then, we’d hope that they can at the very least go back to their clubs as better players.”
David O’Herlity (St. Eunan’s), Pauric Harvey (Four Masters), James Cunningham (Naomh Conaill), Andy McGlynn (St. Eunan’s) and Nicola Ayres (St. Eunan’s) are also part of the Donegal backroom set up plotting the Farney lads’ downfall in Letterkenny at the weekend.
McCabe hopes that home advantage will mean a good turnout for the Tir Chonaill youngsters.
“Hopefully we get a good day and, as a result, a good crowd. They deserve it. They’re a talented and hardworking group and it would be great to have as nice turnout there for them. The goal at the start of the year was to get out of our section. We’ve done that now so the next target has to be the final.
“A Buncrana Cup medal is a great one to have. There was a time when they were regularly coming back to the county. We haven’t reached those heights as much as we’d have liked in recent seasons. So we’d love to get back to a final with a win at the weekend.