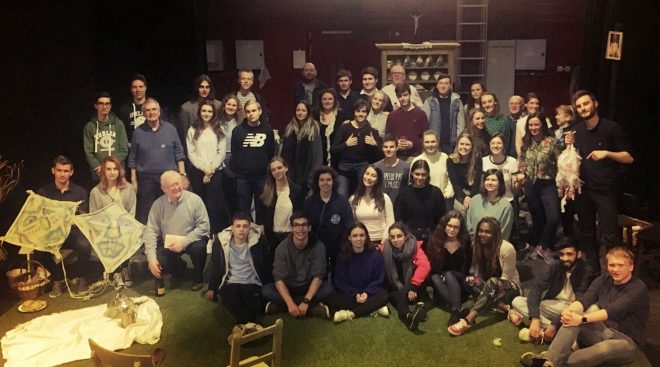 The students and teachers of the European School on the set with The Lifford Players.

THIRTY-four students from Luxembourg travelled to Derry last week to see Dancing at Lughnasa performed by a Donegal cast.
The students, from eight countries, are preparing to sit the European Baccalureate in June. This year the set text for their English course is Brian Friel’s famous play and the wider theme is that of Change.
Ms Sinéad O’Donovan from Cork has been teaching in the European School of Luxembourg for the past seven years. She teaches English as a second and third language and Gaeilge at second level.
Since September her students had been asking her to take them on a trip to Ireland to see a production of Dancing at Lughnasa without success, until she found out in January that The Lifford Players were performing the play on the drama circuit.
She contacted the producer Aidan O’Doherty and checked their performance schedule and school calendar but, unfortunately, the dates did not match. Sinéad takes up the story.
“Aidan did say that he would speak to the cast to see if they could put it on for the students in April before the pressure was on them in the lead up to their exams. The only date we could go was April 14th due to mock exams and school holidays.
“It was a long shot but after some time he got back to me saying they could all do it except the actress that plays Maggie as she had a holiday booked! Fortunately Aidan was able to secure another Maggie from another drama group so we set the wheels in motion, organising the trip,” she said.
Within a few weeks Sinéad, her colleague Matt Gambrill and 34 students of English from eight different countries were on a plane to Dublin. The UK inspector to the European Schools, Paul Metcalf, joined them in Dublin.
On the Saturday Sean T Bonar of Marley Coaches drove the students to The Playhouse Theatre in Derry.
“The entire production was just brilliant and absolutely exceeded our expectations. I was looking around at the students and they were mesmerised, spellbound by the actors and their performances.
“Quite honestly it is something that none of us will ever forget. To see Dancing at Lughnasa performed in Derry by a native Donegal cast was sheer magic, an absolute privilege.
“Following two well-deserved standing ovations, the cast, director and producer all came out for a Q&A session with the students. As I sat beside Deedee and Kate, who play Agnes and Kate respectively, it was really special to see the students engage with them in such a meaningful way. They were well and truly star-struck. Nothing had prepared them for the magic of seeing Friel’s words brought to life by these talented young women.
“We will be indebted forever to Aidan O’Doherty and the entire team of Lifford Players for having the goodwill to perform the play especially for us. I’ve no doubt but that the whole weekend’s experiences were enriching for them and will undoubtedly help them immeasurably as they prepare for their Bac exams in June,” she said.
The next step is to bring Ballybeg and Donegal to Luxembourg.