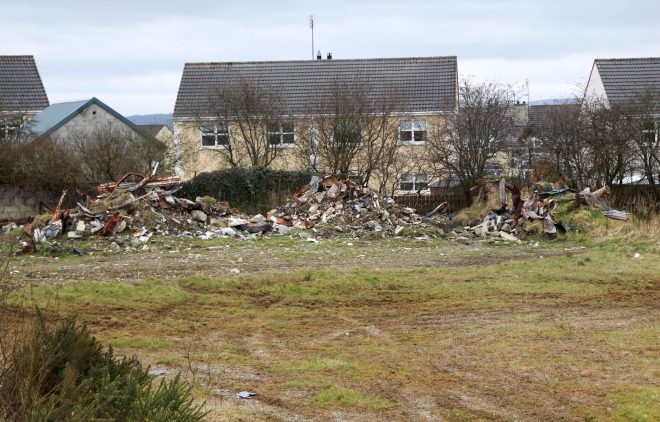 RENEWED calls for a strategic investment plan to drive out anti-social behaviour in a Letterkenny residential area that has become a blackspot for illegal activity have been made.
The move comes as fresh concern has been raised about activity taking place on Council owned derelict land in Glencar, where incidents of illegal dumping and anti-social behaviour have been commonplace in recent years.
Residents from the Windmill View estate in the area have been most affected by the activity. In July of last year, people in the area were left horrified after a gas cylinder was placed on a bonfire and set alight in the Glencar/Killylastin area.
At the latest sitting of Letterkenny Municipal District, Cllr Ciaran Brogan (FF) received a response to a written question he submitted in relation to the issue. He asked for an updated report on what steps have been taken to identify the need for the derelict sites owned by the local authority in Glencar, that are currently being used for illegal dumping and anti-social behaviour, causing significant problems for residents in the area, and particularly Windmill View.
He was told by Council officials that the matter is “currently being examined”. A update is expected to be provided to Cllrs in advance of the next MD meeting.
Speaking to the Donegal News Cllr Brogan said an obligation to residents to resolve the issue must be upheld.
“The land in question is land the Council acquired and it has been lying empty for a long number of years and since then it has become home to derelict bonfires and other activity, which has become a concern for residents in the area.”
Cllr Brogan said a motion he tabled 18 months ago that a plan be put in place to deal with the issue was passed, but since, nothing has materialised.
“We have an obligation to the residents. This issue is going back ten plus years. The houses that were on that land have since been demolished and that is when issues first arose.  Residents in the area are concerned.”
Cllr Brogan said he has repeatedly called on Council officials to address the issue. He said he was “dissatisfied” with the written response he received at the latest sitting of Letterkenny MD.
Cathaoirleach of Donegal County Council, Cllr Gerry McMonagle said there have been a “number of difficulties” on Council owned sites in the area.
He said investment to the area bringing out its full potential is the only way to resolve the issue.
“I have always asked the question of what is there for young people in that area? From the hospital to Iona and on up to Glencar is a vast area. We have a great green area to the back of the shops for walkers and such, but in terms of actual facilities there’s very little. We must invest in that area. We have youth groups who use the area but there are no facilities for them as such.
“There are many interested groups which would love to have that land made available to them and I don’t see why this shouldn’t happen with funding or match funding. Young people are generally good, but it is when there is boredom and a lack of activity that anti-social behaviour sets in.
“As councillors, we condemn what is happening there,  but we need to find a way stop it. Investment is the only way forward,” he said.