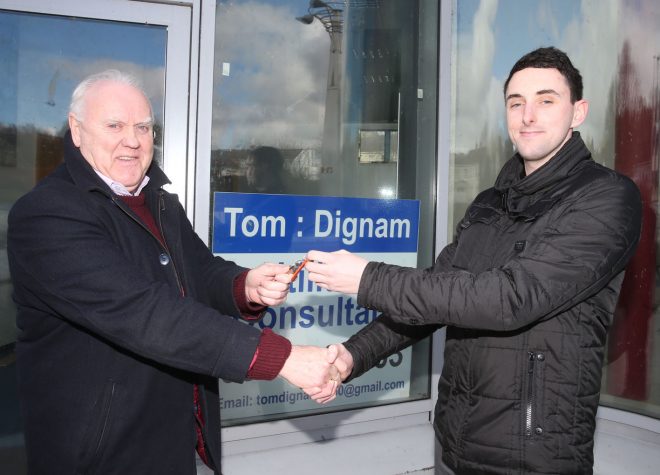 Kube tenant Tom Dignam receiving the keys of his offices from Noel Gildea, proprietor of The Kube.

ONE of Donegal’s best-known buildings is back open for business, sixteen months after seventy gardaí were deployed by the High Court to secure possession of the premises.
The Kube building at Thorn Road, Letterkenny, welcomed its first new clients – five enterprises which hope to employ up to twenty people – in the past week with negotiations ongoing with other businesses.
The 15,000 sq ft premises was built by local contractor Mr Brendan Gildea before it was taken over by a receiver appointed by Danske Bank which was owed millions by Mr Gildea’s company.
In November 2016 the receiver got High Court orders against Mr Gildea before gardaí were deployed in the operation to secure possession of the building.
At the time the premises had only one tenant, Donegal County Council’s Central Laboratory, which occupied the second floor.
“Earlier this month we took back control of the property – property which is still owned by Brendan Gildea.
“We walked into an empty building and assumed control of property which is legally his in the first place,” Mr Johnny Gavigan, a spokesman for The Helping Hand said.
The Helping Hand is a group that helps people to deal with bank debt, fight against repossessions and receiverships.
“We’re helping people to come together as groups to help one another,” Mr Gavigan said.
“It seemed an appropriate time to go back into The Kube. The building was lying empty and already we have rented space to five different enterprises and we’re in negotiation with a few more including a local gym.
“We’re working hard to bring employment back into the area. Ultimately, we would like to se the whole building utilised. The Helping Hands has also taken a space and we held our weekly meeting in The Kube last Monday night,” Mr Gavigan said.
“Far too many people have been put under far too much pressure for far too long. I see that the vulture funds made national headlines in recent weeks but we’ve been fighting against them these past few years. A lot of people out there are worried and they’re only too willing to try and come to some arrangements but these people aren’t interested in talking to customers,” he claimed.
When asked about breaching the security cordon put in place at The Kube following the High Court hearing, Mr Gavigan said that the security company left the site in August last year.
“It’s been lying idle and empty since. We always said there was no need for those people (security) and that message was relayed to them at the time,” he explained.
“We haven’t handed out any money to anyone because Mr Gildea remains the rightful owner of the property; we’re prepared for every possible eventuality,” Mr Gavigan added when asked about their legal standing. 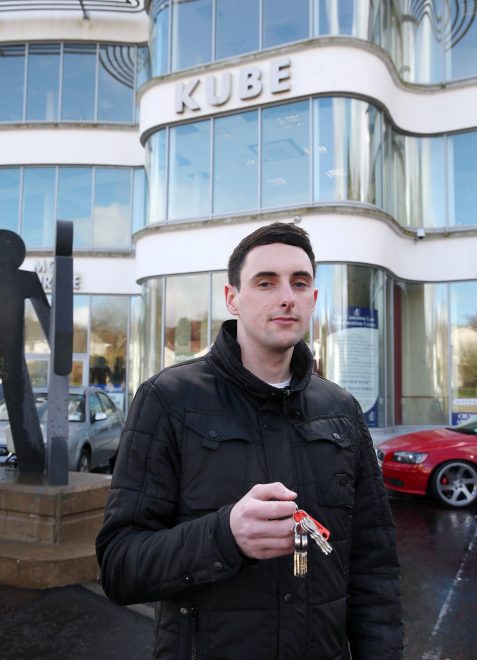