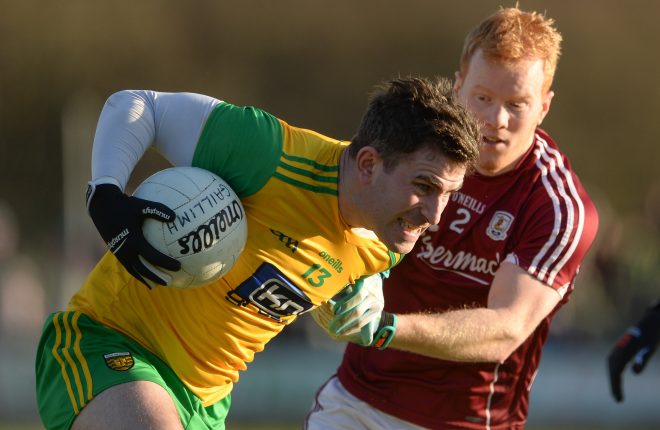 4 February 2018; Patrick McBrearty of Donegal in action against Declan Kyne of Galway during the Allianz Football League Division 1 Round 2 match between Donegal and Galway at O’Donnell Park, in Letterkenny, Donegal. Photo by Oliver McVeigh/Sportsfile

It was another case of ‘what might have been’ last week as we lost by the narrowest of margins to Galway in O’Donnell Park.

The lads worked hard in the game, but we just fell short for the second week in-a-row.

There were still plenty of positives to take from the game, and it was encouraging to see some players standing up and taking responsibility.

I know I’ve said it before, but it’s a learning curve for the younger lads.

Very few just come straight in and establish themselves – there are ups and downs, and people need to be patient.

The lads are realising that a mistake, or a drop in concentration even for a split second, can be punished to the full.

You might get away with it at club or underage level, but senior football is a different level.

We have a lot of work to do, but with games coming so thick and fast, there’s not actually that much time to work on things at training, as you’re gearing up for different games week on week.

With all the rain and snow at the minute, conditions for training aren’t ideal either, but every team is encountering the same issues and you have to get on with it.

It’s disappointing that we haven’t got anything from the last two games, but the lads are still very upbeat, and there will be a pep in the step this week as we head for Croke Park.

It doesn’t get much tougher than playing Dublin in their own back yard, but it’s a challenge that we’re all looking forward to.

The Dubs are the standard-bearers, and every county in Ireland has to aim to get to their level, and we are certainly no different.

They may not have their full panel out yet, as some players are eased back in, and obviously, Con O’Callaghan is playing with Cuala hurlers this week.

However, they will still be formidable opponents. James McCarthy was Footballer of the Year last season, and Brian Fenton has started the year in really fine form.

Then you have the likes of Ciaran Kilkenny, Paul Mannion, and Dean Rock in the forward line, so there will be no shortage of firepower even without O’Callaghan. 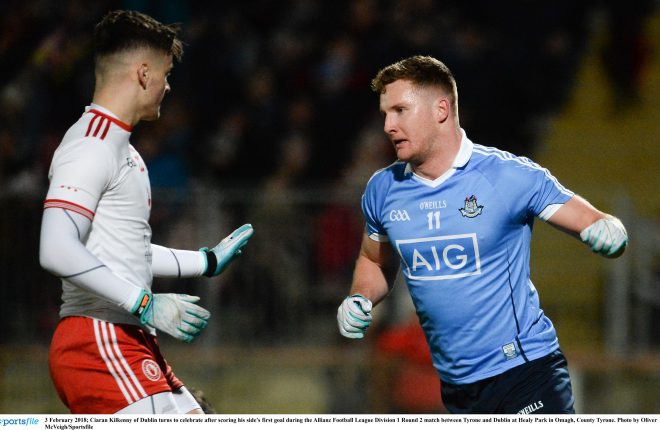 3 February 2018; Ciaran Kilkenny of Dublin turns to celebrate after scoring his side’s first goal during the Allianz Football League Division 1 Round 2 match between Tyrone and Dublin at Healy Park in Omagh, County Tyrone. Photo by Oliver McVeigh/Sportsfile

It’s going to be a huge challenge for us, but these are the type of games that we want to be involved in and we will give it everything we have on Saturday evening.

One of the big talking point in GAA circles this week is player burnout.

With the third-level competitions taking place at the moment, along with the National Football League, there is a heavy workload on players.

I read somewhere that Clare’s Ciaran Russell played six games in the last two weeks between the league, the Sigerson and the Fitzgibbon Cups. That’s before the word training is even mentioned.

We have played a young Donegal team in the National League, and a lot of those lads have college commitments at this time of the year as well.

There’s far too much going on at the moment, and the GAA are really going to have to take action and move the third-level competitions to November and December.

The GAA calendar is too congested, and if we want to make more time for clubs, then something has to go, because lads are at risk of picking up injuries if they do too much, and that’s what happened to David Clifford last week.

A lot of these young players are on sports scholarships, and some colleges are putting them under enormous pressure to play.

They’re saying that if x, y, or z, doesn’t play for the college team, then he will have his scholarship withdrawn, and it will be up to his parents or the county board to foot the bill.

What is a player meant to do in that situation? They’re being held to ransom.

Young lads dream of growing up to wear the Donegal jersey, or Tyrone, or Monaghan, or whatever county they are from.

Breaking through into the senior ranks is far from easy, and this is their best chance to get blooded in when some of the more established players aren’t playing.

Something has to be done about this situation going forward, because players are going to get seriously injured.

The GAA got rid of the Railway Cup because they couldn’t find the right time to play it.

If colleges aren’t prepared to play the third-level competitions in November and December, then they should be scraped as well.

I was very sad to hear of the death of my old friend and mentor Liam O’Reilly last Sunday.

I first came across Liam back in the late seventies, when I was just a young lad starting out on my GAA career.

Liam was managing the Rosses Rovers Under 12 team along with my late father Dan.

We enjoyed great success winning the Under 12 county title back in 1977, and we later landed championships at Under 14 and Under 16 level, as well as the Under 15 Óg Sport.

Liam went on to manage the Donegal county minors and led them to the Ulster Minor League title in 1982.

That was at a time when Donegal was enjoying very little success at underage level, and it was a significant breakthrough.

I actually missed that Minor League final because I was playing for Rosses Community School in an All-Ireland soccer final down in Limerick.

Liam always gave me a touch about missing the minor match, but both teams got the win, so it proved to be a successful day.

He was a great character, and any time you bumped into him, it wouldn’t be long before a big GAA chat got underway.

He was a proud Mayo man and followed their trials and tribulations closely, but if they weren’t playing, he was most certainly behind Donegal’s cause.

I know he was very proud of his nephew Martin O’Reilly for wearing the green and gold, and credit must go to Martin for playing against Galway last week in difficult circumstances.

Dungloe GAA have lost a great gael, and I’d like to pass on my sympathies to Margaret and Martina, and his family at this difficult time.