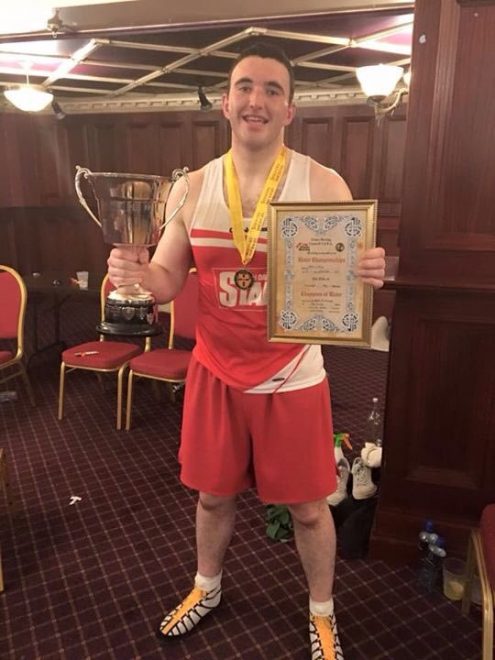 LETTERKENNY boxer Stephen McMonagle has been included in the Northern Ireland team for the 2018 Commonwealth Games which will take place on the Gold Coast in Australia in April.
McMonagle, who boxes out of the famous Holy Trinity club in Belfast, has previously represented Ireland at Multi-Nation Tournaments in France and Russia. This will be his first time to wear the Northern Ireland vest.
An Analytical Chemist, Stephen (30) works in Antrim. The son of Charlie and Margaret McMonagle, Leck, he has five older brothers Brian, Ciaran, Cathal, Michael and Francie and two sisters Mary Gallagher and Catherine.
Speaking to the Donegal News this week, Stephen said it was an honour to have been chosen to box in the +91kg (Super Heavyweight) class at the Commonwealth Games. A three-time Ulster champion, he has also contested an Irish senior heavyweight final.
“We will travel out to Australia in mid-March, a few weeks before the Games, while we’re also going to Germany for a training camp in February. We’ll be really ramping up the training over the next week or two,” he said.
The majority of the team were Ulster Elite champions in November, aside from Kurt Walker who missed the tournament due to injury and both McMonagle and Holy Trinity colleague Carly McNaul who lost in the Ulsters to fighters ineligible for the Commonwealth Games.
“I last won the Ulster title in 2016 and while the judges gave the decision to Joe Joyce this time around our coach John Conlan (Michael’s father) felt that I had done enough to win the fight – as did I. He then took my name to the selectors and I got picked,” he said.
Northern Ireland topped the boxing medals table at the 2010 Commonwealths in New Delhi and finished second in the medals table in Glasgow four years later. An impressive haul of 14 medals – five of which were gold – were won at both tournaments.
Stephen has set his sights on bringing home a medal this time around.
“With a bit of luck and a kind draw there’s no reason why I can’t medal. It won’t be for the lack of effort,” he said.
Stephen’s brother Cathal is a five-time Irish champion at super-heavyweight and winning a first national senior title remains very much on his radar.
“I would love to box the Irish seniors in February but we mightn’t be allowed coming, as it does, so close to the Commonwealth Games. If not I’ll try again next year,” he said.
Growing up in a house full of big brothers, it’s not surprising to learn that Stephen has been into sport from a young age.
“You had to be able to fight your corner,” he laughed.
On a more serious note though, he was only too willing to follow the lead of older brother Ciaran in joining the Holy Trinity club when he first moved to Belfast. He will join Carly McNaul (51kg ) and Sean McComb (64kg) from the Holy Trinity club in Australia.
“There’s some very talented boys in the squad and we should do okay,” he said.
“I’ve been boxing since I was sixteen or so. We’ll be flat out training over the next few weeks but it’s a labour of love and it’s worth it when you get some reward for all the time and effort that you put into the sport,” he said.
Northern Ireland will send a squad of 88 athletes across 13 sports to the 2018 Commonwealth Games.
North Tyrone and east Donegal will be well represented on Australia’s God Coast in April as Castlederg’s Sommer Lecky and hammer thrower Dempsey McGuigan – who both compete in the colours of Finn Valley AC – are part of the athletics squad while Raphoe’s Rachael Darragh has been selected to represent NI in badminton.
A total of twelve athletes were selected, including double World Para Athletics Junior wheelchair champion Jack Agnew who is tipped as a future Olympian. This is the second highest ever figure behind the Glasgow Games in 2014 when 14 were selected.
The athletes list is headed by Euro 1,500 metres bronze medallist Ciara Mageean who is ranked 9th in the Commonwealth. Next is hammer thrower Dempsey McGuigan who has no less than five qualification marks. Sommer Lecky (17) won the High Jump at last year’s Commonwealth Youth Games in the Bahamas and has long been recognised as one of the best in her age group.
Rachael Darragh is the niece of three-time Olympian Chloe Magee and has had a stellar year, reaching the last eight of the ladies singles in Latvia, Lithuania and Slovakia, and the semi finals at the Welsh International.