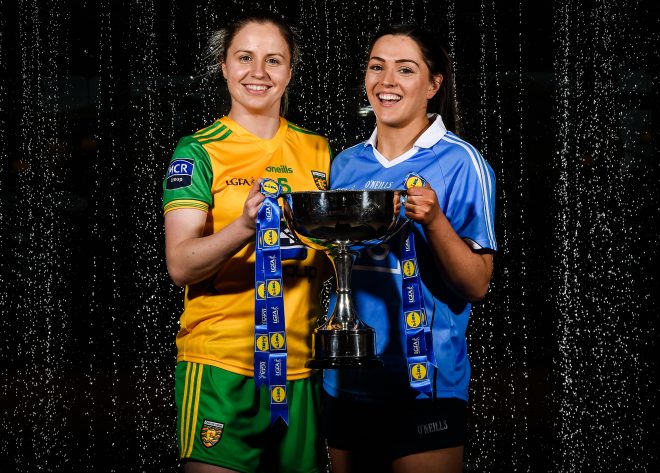 ULSTER champions, Donegal are expected to hand debuts to a number of players in their opening LIDL NFL game in O’Donnell Park on Sunday afternoon, throw-in 2pm.
All-Ireland champions Dublin are the visitors to Letterkenny for the ladies the first competitive game under the new management team of Maxi Curran and Damian Devaney.
Glenfin powerhouse Karen Guthrie has been named at team captain ahead of the 2018 season with Glenfin team-mate Yvonne Bonner and Ciara Hegarty, Moville, joint vice-captains.
With All Star forward Geraldine McLaughlin (knee), Termon colleague Therese McCafferty (concussion), Four Masters’ Kate Keaney (knee) and Shannon McGroddy (Downings) all unavailable, the starting 15 is expected to contain a few new faces.
While Donegal have yet to release their team, young forwards Sarah Jane McDonald (Moville) and Bridget Gallagher (Termon) as well as defender Olive McCafferty (Termon) are all pushing hard for starting spots.
“We’ve played Cavan and Waterford in recent weeks. It’s given us an ideal opportunity to view a number of players ahead of the 2018 season and some of the younger players have done very well.
“The main thing at this early stage of the season is to retain our Division 1 status as soon as we possibly can and then push on from them,” Damien Devaney explained.
“We would love to blood a few new players over the coming weeks and, hopefully, slot them into the team for the Championship,” he added.
“We’ve lost Shannon (McGroddy) due to work commitments, while it’s great to see Kate (Keaney) back jogging after her cruciate injury. Geraldine (McLaughlin) will be out for a few more weeks and we’ll ease Therese (McCafferty) back in after she picked up a concussion at training a few weeks back,” he said.
With eight members of the Donegal squad currently based in Dublin, Damian and Maxi try to attend one night’s training in the capital each week while all the squad come together in Donegal each weekend.
“We must have ten to twelve new faces in the squad this year – players from a lot of different clubs like Glenfin, Moville and St Eunan’s. It’s a good sign and, together, with the more experienced girls in the squad we’re hoping that they’ll gel,” he said.
First up is a meeting with All-Ireland champions Dublin.
“Maybe we’re getting them at a good time of year. They’re All Ireland champions and have had a longer break than most counties so hopefully they’ll still not be back up to full speed when they come to Letterkenny. That said, we know that they’re a strong, physical, athletic team and we’ll have our work cut out for us on Sunday,” he said.
2017 saw Donegal win the Ulster Championship while they also reached the Division 1 final, which they lost to Cork. Their All-Ireland bid was ended by Mayo in a quarter-final.
“The commitment from the squad has been top class as has that from the rest of the backroom team,” he said.
That team includes 1992 All-Ireland winning goalkeeper Gary Walsh, Adam Speer, Johnny McGinley, Sinead Martin, Sarah Herron, Sabrina Barnett, and Marie McColgan.
“The Championship is our main aim. We would like a good run in Ulster and then see where that takes us. The girls had a seven-week break from winning Ulster before playing their All-Ireland quarter-final last year. Things have tightened up considerably this year and, hopefully, we can do as well again,” he said.