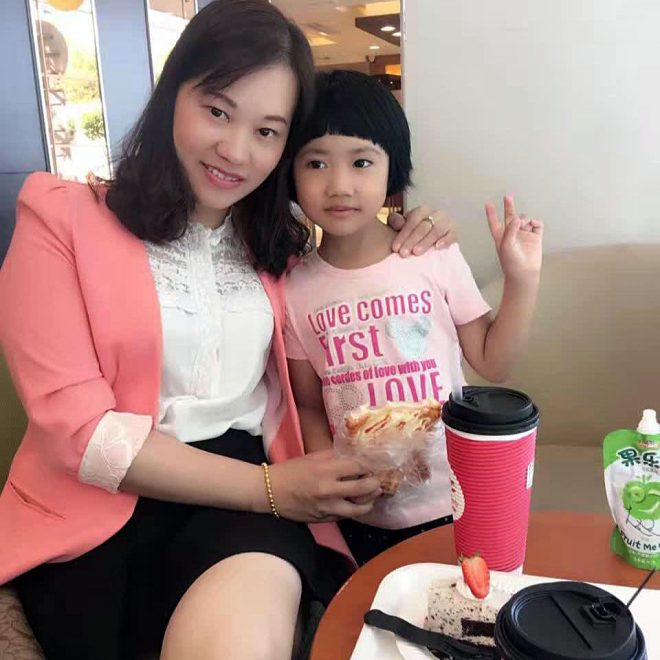 Yuhan Chen with her mother Jessie.

A YOUNG mother, who has spent more than four years fighting to bring her daughter to Donegal, has been told a visa is now waiting and ready for them in China.
Xiulan Ye (better known locally as Jessie) took her young daughter Yuhan Chen (7) to her parents home in Fujian, a province on the southeast coast of China, following the tragic death of her husband in Donegal in 2013.
Since then Yuhan has been living with Jessie’s family in a city near Beijing while her older brother Jacky, who grew up and studies in Glenties, now lives in Ardara with his mother.
“This is the best New Year’s present that a mother could ever get. I am going to have my daughter home at last,” Jessie said.
Jessie and her late husband Andy opened the Peking Chinese takeaway in Glenties when they first arrived in Donegal more than a decade ago but following the unexpected death of her husband in 2013 Jessie relocated to nearby Ardara with her two young children. There, she opened another Chinese takeaway.
Young Yuhan returned to China in 2013 with her father’s ashes. At the time Xiulan’s parents thought it too hard for her to look after her daughter and run a business, so they convinced her to let Yuhan stay with them.
Now, with her parents getting old and her daughter growing up very quickly Jessie has been anxious to bring Yuhan to Donegal but has found it difficult to obtain a visa for her daughter after a number of failed attempts over the past four years.
Ms Kathy Lee McClean, an English to Cantonese/Mandarin translator, confirmed that the relevant paper work had now been processed and Jessie has until April 15 to travel to China and take up the visa.
“It’s fantastic news, it’s going to happen. Jessie, who has been fighting to be reunited with her daughter has been informed a visa for her daughter to join her is waiting and ready. So thank you, thanks to all of you who have made it known Jessie has your support.
“From close friends, customers to the business, from mothers who read the story in the newspaper, the letters of support, the online petition and TD pressure, Jessie is overcome with emotion now. Her daughter can come home. Her brother is jumping for joy knowing his sister will be back home,” she said.
“This is a story of such feel good proportions it should bring tears of joy to each and every one of us. Jessie would like to thank you all from the bottom of her heart, such wonderful people,” she added.
Jessie hopes to fly out to China on February 15 and is expected back home in Donegal at the beginning of March with her daughter.
With the Chinese New Year Festival starting the following day, February 16, it really is shaping up to be a great 2018 for one Donegal family.