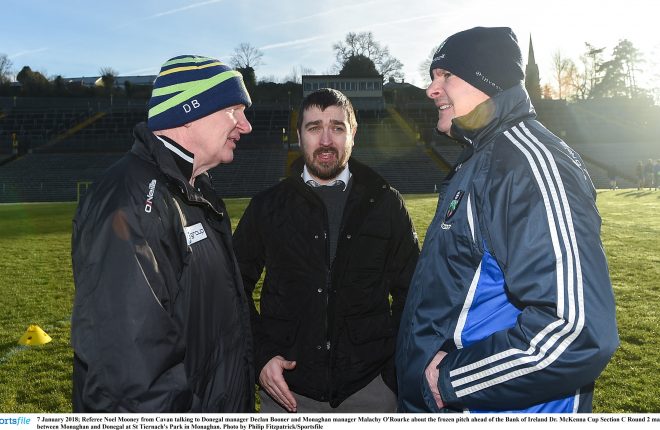 7 January 2018; Referee Noel Mooney from Cavan talking to Donegal manager Declan Booner and Monaghan manager Malachy O’Rourke about the frozen pitch ahead of the Bank of Ireland Dr. McKenna Cup Section C Round 2 match between Monaghan and Donegal at St Tiernach’s Park in Monaghan. Photo by Philip Fitzpatrick/Sportsfile

IT’S been a hectic week, and it feels like I’ve spent the majority of it looking at the weather forecast.

We were due to play two games this week, and only one of them went ahead, and even it was in doubt, just a few hours before throw-in.

It’s difficult playing games at the start of January due to the weather, and it’s frustrating when they don’t go ahead.

I’ve heard a bit of talk this week about scraping pre-season competitions like the McKenna Cup, but I still think they have a place in the GAA calendar.

We’ve had lads in the gym since October, and they have been pushing themselves hard.

They’ve also been put through their paces on the pitch since the start of December.

All that training can be tough going, so a couple of games in between can keep the mind fresh, and also helps us prepare for the start of the National League.

It was disappointing that the game with Monaghan didn’t go ahead, and I felt for the supporters that made the journey.

A lot of them were on the road for more than two hours on a frosty morning to come and back the team, and it’s not right that the game was postponed then when they arrived.

As we were leaving Donegal on the team bus, the temperature was -5, and it was always going to be a big ask for the game to go ahead.

The Clones pitch was hard, but probably playable in most places, apart from one corner. In fairness to the referee he took the correct decision to postpone the match.

It knocked our schedule out a bit, and then to compound matters, the pitch in Convoy was frozen on Monday as well, so we got no work done then either.

I was glad to see the cold snap lift, and I didn’t think there would be any problem with Wednesday’s game.

On the day of the match, there was a blue sky in front of me at home, but I got word just before 3pm that there was a lot of fog in Ballybofey, and the game was in doubt.

Thankfully it was given the go-ahead, and the fog wasn’t actually that bad when the match got going.

We lost the game on the night to Fermanagh, but it was still a very useful exercise for us.

We were up against an experienced Fermanagh side, and we were maybe naive at times which cost us. 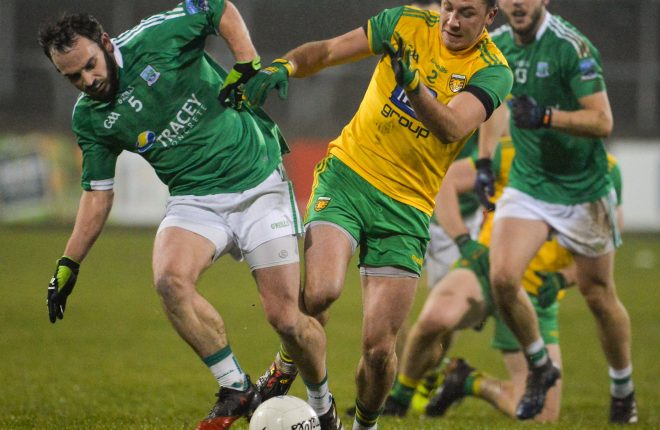 10 January 2018; Paul McCusker of Fermanagh in action against Paul Brennan of Donegal during the Bank of Ireland Dr. McKenna Cup Section C Round 3 match between Donegal and Fermanagh at Páirc MacCumhaill in Ballybofey, Donegal. Photo by Oliver McVeigh/Sportsfile

Still, it was a good competitive 70 minutes and that will serve us well as we prepare for the National League opener with Kerry.

We’ll have a few more players back for that, but we’ve been given plenty of food for thought by the lads that have featured over the last week.

We’ll get another good test against Monaghan in Clones this Sunday. They won by 12 points against Queen’s on Wednesday, so they are going well.

We’re looking forward to the game. People might say there is no place for the McKenna Cup, but if we weren’t playing this weekend, we’d probably have to go and find a challenge game. So you’re probably as well playing competitive matches.

That first league game with Kerry is just around the corner now, and we’re still looking to get things into place for that match. 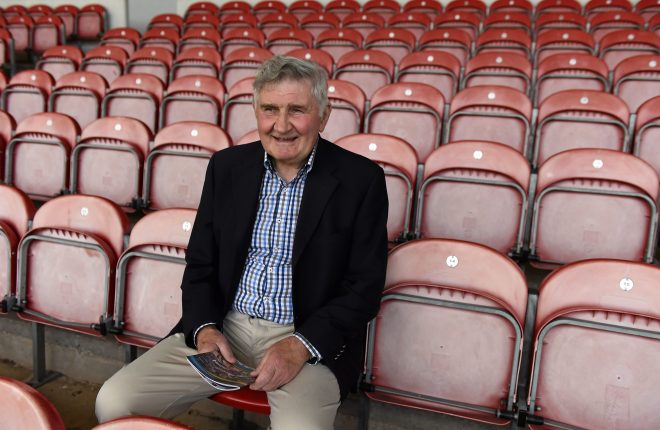 It’s not often that I get time to sit down and watch a bit of TV these days, but I made sure to catch the documentary on Mick O’Dwyer on Monday night, and I have to say I thought it was a brilliant watch.

The man is a national treasure, and is one of the great characters in the history of the GAA.

He has had a phenomenal life and it was great to see it captured in one documentary. It was a really entertaining hour, and it could have went on for another 60 minutes, as he has led such a busy life.

Micko is regarded as one of the great GAA managers, but you rarely hear much about his playing career, and he certainly got a lot out of his own playing days.

He was the first Waterville man to line out for Kerry, and went on to play in nine All-Ireland Finals, winning four of them.

Like all great Kerry men, he wasn’t short of confidence, and after retiring, he decided to come back again because the replacements weren’t up to scratch.

He went on to have a marvellous managerial career, and nurtured and developed the greatest Gaelic Football team of all time.

He led them to four All-Irelands in succession, but you could still sense his disappointment at being denied the five in-a-row by Seamus Darby’s nudge.

Even now, more than 30 years later, it still doesn’t sit right with him, and that is a sign of a true winner.

Micko managed to bring Kerry back to win three more All-Irelands on the trot, and that was a great achievement as well.

I found it funny that with all the talk of commercialisation in the GAA these days, Kerry were being sponsored by Adidas, and washing machine and milk companies back then.

They got 20 grand from Adidas which was serious money at that time, and Micko knew how to pull on the right strings.

He went on to bring good days to Kildare, Laois, and Wicklow, and is remembered fondly in those counties as well.

I thought it was lovely how it finished up with him coaching the Waterville Dromid’s Under 14 team to the Division 5 County League title.

After all his successful days, he still had the humility to go and help out his own community, and it’s a reminder that the GAA will always go full circle.

It was a really entertaining watch and Micko will go down as one of the great gaels.