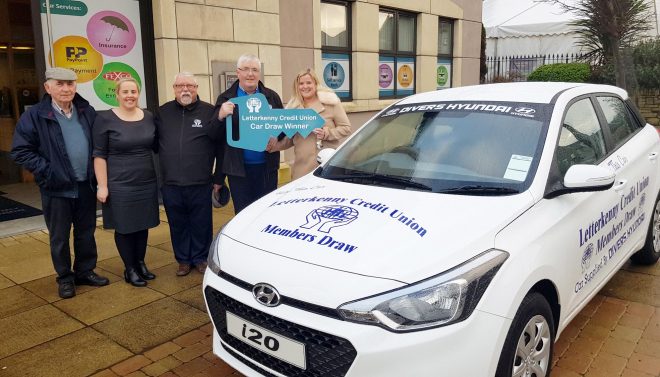 TWO of the largest credit unions in Donegal are in talks that could lead to a merger, the Donegal News has learned.
It is expected that Letterkenny Credit Union may end up taking over one of the county’s other fifteen other Credit Unions in the coming months should discussions reach a successful conclusion.
Details of the proposed ‘Transfer of Engagement’ or in effect an amalgamation of the two branches will be outlined to members at the Annual General Meeting of Letterkenny Credit Union in the Mount Errigal Hotel on Monday night next, December 18.
Mr Paul Hume, Chairman, Letterkenny Credit Union, confirmed that they had entered discussions on a ‘possibility of an inward transfer of engagement’ with another credit union.
However, he declined to name the other institution, explaining that all would become clear on Monday night. It is understood that both Credit Unions are profitable and well reserved.
Over 70 Credit Unions nationwide have amalgamated in recent years, with Ballyshannon and Killybegs branches in Donegal merging last year.
Meanwhile, Letterkenny Credit Union remains in great financial health and will continue to be in a strong financial position for many years to come, according to the Chairman.
In his report, Mr Hume said that 2017 was another successful year for Letterkenny Credit Union where membership continues to grow.
Over €15.5 million was issued in loans to the year ended September 30th, up more than €2m on the corresponding figure for 2016.
Mr Hume said that, despite the prevailing difficult economic climate, Letterkenny enjoyed another successful year.
“We have surpassed expectations in a number of areas such as savings, lendings, investments and surplus all coming in ahead of budget. Our loan portfolio grew by over 19% clearly demonstrating the loyalty and trust of members in deciding to do most of their financial business with Letterkenny Credit Union,” Mr Hume said.
“Growing our loan book on an ongoing basis is critical at this point in time, especially when viewed in the context of current extremely low returns on investments and the prevailing expert opinion of low investment returns for the foreseeable future. Our energy will remain focussed on approaches and opportunities to increase loan demand and encourage more of our members who have a borrowing requirement to avail of our very competitive loan offering,” he added.
According to the balance sheet members loans now total €24.077 million, a 20% increase on the previous year’s total. Members shares broke through the €70 million barrier this year – up from €65 million in 2016.
The area covered by Letterkenny Credit Union now includes Ramelton, Termon, Kilmacrennan, Churchill, Gartan and the greater Letterkenny area.