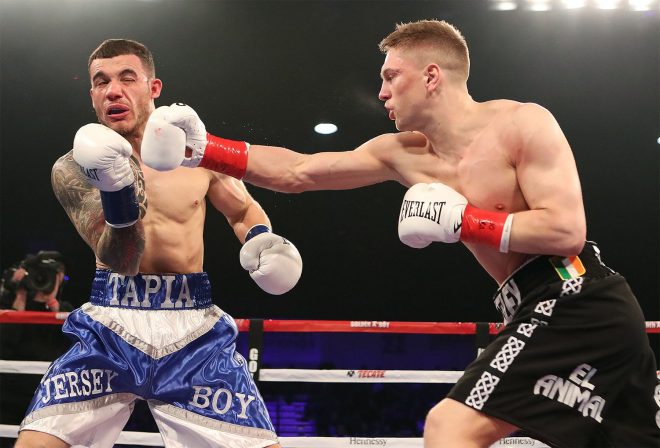 Jason Quigley in action against Glen Tapia earlier this year.

IRISH middleweight Jason Quigley has become the latest addition to Dominic Ingle’s Sheffield stable.
The 26-year-old Twins Towns man is relocating to the Ingle Gym having been based in Los Angeles since turning professional in 2014.
Quigley overcame Glen Tapia in March to win the NABF middleweight title, will begin training with Ingle after Christmas.
“I plan to make big waves in 2018,” Quigley said.
“A lot of the fighters Dominic has had have the same style as myself. They’re elusive, technically sound boxers, who have power. Where I have got to already has come from my boxing ability.
“When you turn pro, people think you have to turn around and start landing big, heavy shots. But you need to box. Boxing is a skill and a technique. The sport is boxing and I’ve got to where I am by boxing. It’s time to tap back into my technique and my boxing skills. Dominic Ingle will bring those out of me.
“Look at the fighters Dominic has with him: Kell Brook, Kid Galahad, Junior Witter, Billy Joe Saunders…A continuous success story. I plan to be another success story in 2018.”
Although Quigley is moving back across the Atlantic, the Irishman will still be promoted by Golden Boy Promotions and managed by Sheer Sports Management.
He said: “It’s a big move and people will question it – but it’s perfect for me,” Quigley said.
“Even when I talk about it, I can feel a smile on my face. when something feels so right, you just have to go make it happen.
“I have had a great time in America. Leaving LA was a decision that I took a lot of time to think about, but I’m happy that I have made the right decision.
“I’m happy that I have the full backing of Golden Boy Promotions and Sheer Sports Management for the move.”
Ingle is excited by the addition of Quigley
“Jason is 13-0, he’s unbeaten, but he has come under the radar here. He has world title potential. Not everyone has that, but Jason does. He has made the right move to get him to the world title.
“He’s got a good style, he’s smart and he has a good boxing brain. We will bring him through and see what works.
“He will get quality sparring here, too, and we’ll get him on a good programme immediately.
As an amateur, Quigley won European gold and World silver medals in 2013 before being snapped up by Oscar De La Hoya’s Golden Boy Promotions.