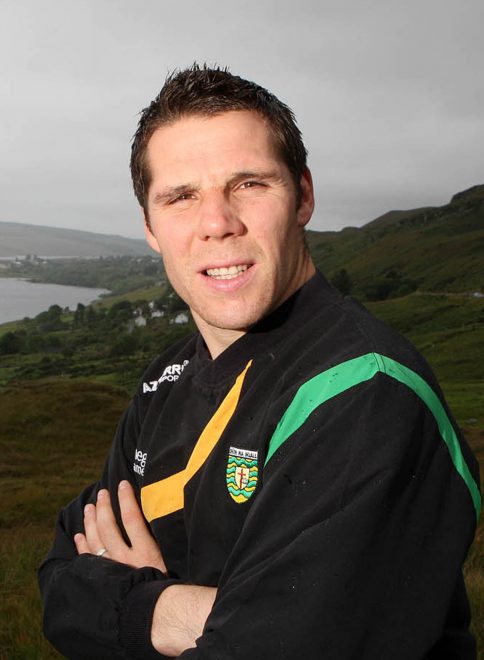 FORMER Donegal footballer Kevin Cassidy will be among a group of over 400 current and former inter-county GAA players who are taking part in a solidarity sleep-out tomorrow, Saturday, under the umbrella of ‘Gaelic Voices for Change’.
Cassidy and fellow Gaoth Dobhair man Hugh McGinley will be among those taking part in the sleep-out outside the GPO on Dublin’s O’Connell Street from 6pm to 6am.
Dublin is one of 12 towns and cities which have been chosen by the group in a bid to draw attention to the homelessness crisis, raise funds, and call for action.
“It is an honour to be involved in such a cause where local charities will benefit directly,” Cassidy said.
“When you play county football, hurling or camoige, the public recognises you. County players have a profile and it’s that profile that the group want to utilise,” he added.
A special needs teacher at the Little Angels School in Letterkenny, Cassidy said he had been contacted to become involved by Eamonn Fennell, the fo3rmer Dublin player who is a key member of the Gaelic Voices For Change group.
“There’s a massive crisis out there at the moment. We watch it on television every night in the warmth of our own homes and, sometimes, we take it for granted. I’ve spent a fair bit of time in Dublin these past few weeks and I’ve watched on as homeless people search for a hotel room or shelter late at night.
“Life has become so busy for us all, we lose touch with the things that matter the most to us and we are constantly chasing something, very seldom do we stop and appreciate what we all have and how lucky we are,” he added.
‘Gaelic Voices for Change’ is a new player-led social movement, which is supported by the GPA and WGPA, and feel strongly that the GAA is based on community values and that they want to use their voice to support the most vulnerable in society. They have identified the housing and homeless crisis as a priority area to focus on but are also keen to look at areas such as mental health, gambling and racism.
People can donate at www.gaelicvoicesforchange.com