Advertisement
HomeBreaking NewsPat Heaney: A man of many roles laid to rest
Advertisement 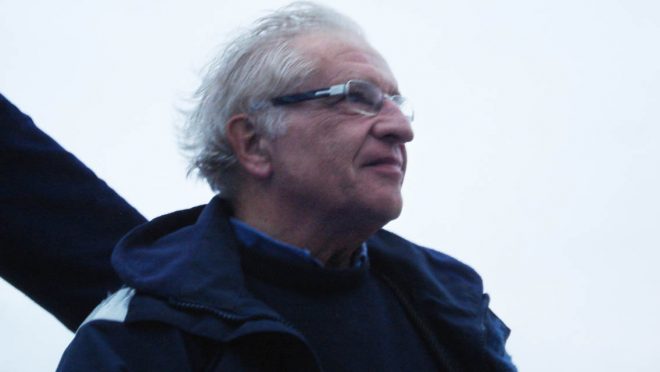 MEMBERS of the RNLI Lough Swilly Lifeboat Station at Ned’s Point formed a guard of honour as one if its founders was laid to rest on Friday.
Mr Pat Heaney, former Lifeboat Operations Manager (LOM) at Porthaw, passed away at his home at Derrygrath, Gollan Hill, Fahan following an illness on Wednesday.
Pat is married to Kate Heaney, a senior reporter with the Donegal News.
St Mura’s Church, Fahan, was packed to overflowing for Pat’s Requiem Mass at 11am on Friday morning which was celebrated by Fr Fintan Diggin, CC, Burt, assisted by Fr Neal Carlin. St Anthony’s Retreat Centre. Dundrean, Burnfoot.
The readings, Prayers of the Faithful and gifts to the altar were all performed by family members.
In a lovely tribute to her late father, Pat’s youngest daughter Fifi remembered a man who fulfilled many roles – a sailor, an entrepreneur, a gentleman, a friend, a son, a brother, a husband, a grandfather, father and, most importantly, their dad.
“Being the youngest in the family I was very fortunate to have been raised by a man who had reached the stage in his life where he was free and easy,” she said.
The congregation heard that over the years, Pat had acquired many names for himself, including ‘The Oracle’, ‘The Fountain of Knowledge’ and ‘Einstein’ because of the amazing teachings he shared with his children.
“I’m forever grateful for the wonderful life lessons and stories he gave me which he expressed through his ‘say it like it is’ personality,” Fifi said.
The eldest of fifteen, Pat worked in the family dairy business in Pennyburn and later selling bottled gas.
In his homily, Fr Carlin recalled a man who was instrumental in the establishment of the Ned’s Point lifeboat station in Buncrana. He also remembered a man who was a loving husband, father and grandfather.
He explained that it was Pat who first initiated the idea of a marina in Fahan as well as bringing the RNLI service to Lough Swilly – a service has since saved many lived in Lough Swilly and the general area since.
The Ned’s Point service opened in July 1988 and Mr Heaney became the station’s first LOM before moving to the role of Chairman in 1992.
Mr John McCarter, the current RNLI Lough Swilly LOM, said that it was Pat and Kate’s huge work that first got the RNLI to come to Lough Swilly following the tragic death of Phil Coulter’s brother, Brian, in 1984.
“An awful lot of people have been rescued and many lives have been saved thanks to their efforts,” Mr McCarter said.
“We’ve certainly rescued in excess of 750 people and we’ve actually saved over fifty lives. You can put that down directly to Pat and Kate,” he added.
Pat is survived by his wife Kate, daughters Susan, Paula, Maeve and Fifi, his grandson Jordon, his fourteen brothers and sisters, other relatives and a wide circle of family friends.