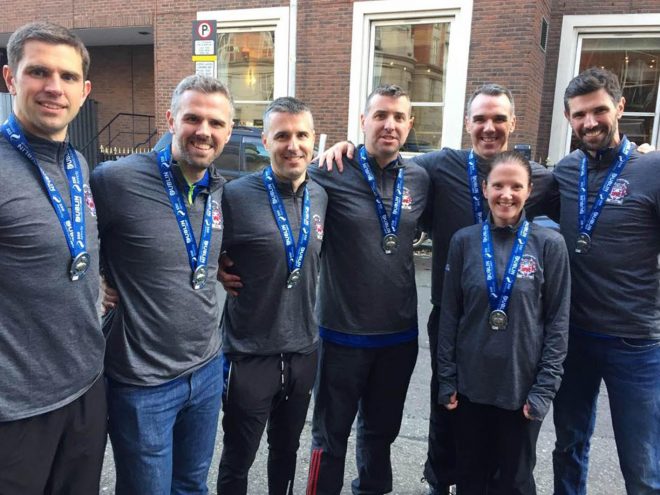 “THE most important thing is not to win but to take part, just as the most important thing in life is not the triumph but the struggle. The essential thing is not to have conquered but to have fought well”
The Olympic Games creed was front and centre in the minds of seven Letterkenny siblings who completed the Dublin City Marathon on Sunday in appreciation of their father’s life-saving treatment.
The Dillon family have already raised in excess of €12,000 for the Irish Kidney Association which has helped their father, well-known retired businessman Jimmy, over the past decade.
“It’s the first and last family marathon,” eldest son James (47) laughed this week.
While Kevin and Ronan ran together for much of the race it was left to Paul to be the first to cross the finish line three hours and 19 minutes after starting the 26.2 mile journey.
His four brothers and one sister – Karl, Christopher, Ronan and Kevin and Rosaleen – followed him home and after just five hours and 8 minutes James became the seventh, and last, sibling to receive his medal.
“It was a fantastic experience for us all. We were all full of energy when we saw the finish line but I’m not so energetic today,” James said.
Family members travelled home from around the world including the US, England and Spain for the run.
They were all kitted out in matching tops, which had the words ‘Dillon 7 Dublin 2017’ embossed on the sleeve and the Dillon family crest on the front, supplied by Kevin who is based in Boston.
They were joined in Dublin by their three older sisters Ann, Michelle and Christine, and their parents Jimmy and Mary.
“It’s probably the first time that all ten of us have all been together since Karl’s wedding the year before last. We had unbelievable support around the course and it was great to see mum and dad there to cheer us all on near the finish,” he said.
“We all stayed together in Dublin and had a bite to eat after the event.
“We also spent ten to fifteen minutes in the freezing cold waters of Dublin Bay before going our separate ways,” he added.
James was quick to pay tribute to their spouses and families for their help and support over recent months.
“Some of the spouses had to stay at home to look after young children and were unable to be in Dublin but to each and every one of you I say a sincere thank you on behalf of us all. Thanks for putting up with us and that line should be highlighted and underlined,” he said.
A Galway based physio helped to ensure that James made the start line after a pulled calf muscle almost ruined his plans a week out from the marathon.
“The network of support behind us all was amazing and we’ve all learned so much about nutrition and stretching which, apparently, I’ve been doing all wrong from the past forty years,” he quipped.
“We’ve had nothing but messages of support and good will and it’s been a really positive experience,” he added.
The family has also asked for a huge thanks to be passed on to everyone who gave them support in their hometown and the surrounding areas over the last few months.
Now successfully over their first marathon, some of the Dillon men are already thinking of throwing their hats into the ring for next year’s marathon while Rosaleen and her three sisters might sign up for the Women’s Mini-Marathon.
“For me, it’s all been about lifestyle change and next year we might even chose something a little less onerous in a bid to get all ten of us out. Maybe the 10K in Letterkenny and we’ll do a kilometre each,” he said.
The total amount of money raised today stands at somewhere between €12,000 and €13,000, but the Dillons are hopeful of hitting the €15,000 mark before closing their justgiving account.
“We’ll leave the account open for another week or two yet. We’ve lost toe-nails, have sore hips and knees and tight muscles but it’s been worth it,” he said.
You can donate by going to www.justgiving.com/fundraising/dillon7.