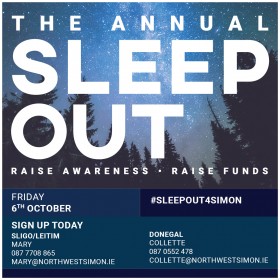 A charity event is to take place this weekend to raise awareness and much needed funds for the North West Simon Community. The annual ‘Sleep Out’ takes place on Friday October 6th from 9pm in Letterkenny Market Square.

As part of their annual Simon Week, the charity will be trying to raise awareness and funds for the homeless, or anyone experiencing housing difficulties in Donegal, Leitrim and Sligo.

Three families have became homeless in the last month in the North West. The latest figures released by the Department of Housing, Planning and Local Government revealed there were no families that were declared homeless in the NW in July of this year, however the figure jumped to three in the month of August.

Between August 21 and 27, three families were homeless in the North West, two of which were single parent families. The families in total made up eight children and four adults.  Most of these were in supported temporary accommodation with onsite professional support while eight were in temporary emergency accommodation which had no, or minimal support.

In the period of July 24 to 30 2017, there were 50 people declared homeless in the North West. 18 of which were from Donegal while the remaining 32 were from Sligo. The majority of these (27) were currently living in supported temporary accommodation which includes hostels with onsite professional support. Eleven of these people were in temporary emergency accommodation which includes no, or minimal support.

In July, out of the 1429 families across the country that were homeless, the North West had none.  A spokesperson from the Department of Housing, Planning and Local Government said the long term solution to the current homeless issue is to increase the supply of homes.

Minister Eoghan Murphy said the number of family presentations nationally in August increased by 13 overall.  “The opening of further family hubs and facilities in the coming weeks and months will further assist in meeting the needs of families in emergency accommodation.

“The Department and local authorities will continue to work closely, quickly and proactively to identify further solutions that will work to help people and families in this very difficult situation.” he said.

Donegal County Council told the Donegal News they currently have 30 social housing projects on site in Ardara, Manorcunningham, Newtowncunningham and Carndonagh. A further 118 sites have had planning approved in Buncrana, Raphoe, Killybegs, Long Lane Letterkenny, donegal Town, Malin and St Johnston. Meanwhile 13 sites in Dunfanaghy are still in the design stage with approval to be sought in Novermber 2017.

For more information about the Letterkenny sleep out phone Collette on 087-0552478.