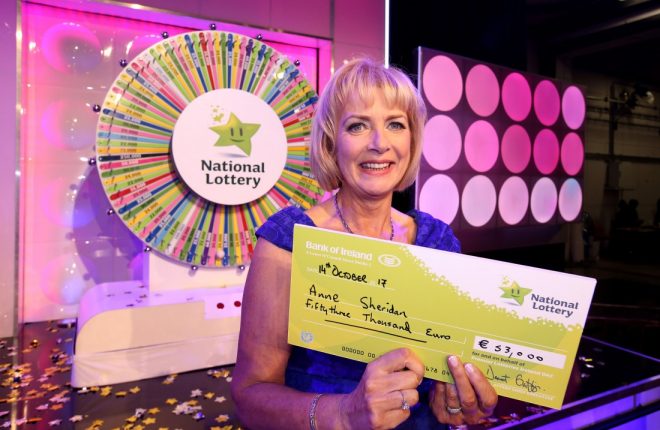 Donegal’s incredible luck on the iconic RTE Winning Streak Game Show continues with two people from the County selected to appear on this week’s show.

Andy O’Connor, from Holly Mount, Carndonagh, and Kieran Clarke, from Bridge Street, Lifford, were both selected to take part on the show following the appearance of yet another Donegal person, Anne Sheridan, from Letterkenny, last Saturday.

Anne (63) got the chance to spin the wheel and took home a whopping €53,000. She plans to get working through her list of things to buy, which includes a new car and phone.

In the week leading up to her appearance on Winning Streak, Anne received a lot of well wishes and prayers from neighbours, family members and friends. Her proud daughter, Aisling, jetted in from Dubai where she works with Emirates Airlines.

On the show, this remarkable Donegal woman paid tribute to her late husband, Seamus, whom she lost to illness six years ago. Anne met Seamus in England where she lived for 33 years. Anne is also proud survivor of breast cancer and she is convinced that Seamus is still looking after her and his divine intervention helped to pull her name out of the Winning Streak drum!

Meanwhile teetotaller Andy O’Connor is looking forward to stepping it out on the Winning Streak Studio this weekend and to show off his talent for waltzing and ballroom dancing!

“I don’t drink or smoke. My one big pleasure is going dancing with my wife, Margaret, once a week to the Isle of Doagh Ballroom in Donegal in summer time. I love dancing I find it very relaxing and great fun,” according to the 59-year-old small farmer from Carndonagh. Their 17 year-old-daughter, Maggie, occasionally goes along also.

Andy Buys Winning Streak scratch cards every week and sends in three star tickets regularly – but this is the first time he has won anything significant. He was lying on the bed watching the show on Saturday when he heard his name being drawn out! Wife Margaret was watching TV in another room

The second Donegal man to appear this week is Kieran Clarke from Lifford. “Getting on Winning Streak might make me Donegal’s most eligible bachelor. I am open to all offers!” joked the single and available 45-year-old.

Kieran is currently unemployed but worked for several years at the amusement arcade in Lifford. But he is far from idle as he devotes most of his time raising funds for the National Council for the Blind and for Breast Cancer Research with his mother, Mimi.

“My mother got me involved in charity work several years ago and we have been all over the world fundraising including to Kilimanjaro, Poland and the United States. We have raised more than €100,000 euros alone for Breast cancer research over the years.”

It was always a dream of Kieran’s to appear on Winning Streak. “I was watching the programme in my bedroom and was recording the show on my phone when I heard my name being called out. I dropped the phone and roared and ran downstairs three steps at a time. They all thought I had gone mad!

He will have a big gang with him on Saturday including his two brothers and four sisters.

Winning Streak scratch cards also offer players the chance to win a once-in-a-lifetime luxury cruise for two worth €5,000. To enter the draw for the Luxury Cruise for two, entrants must collect the 3 letters S-E-A from the stub portion of their Winning Streak scratch card and send those into the National Lottery in the special grey stub envelope which are available from National Lottery retail sales agents. This week’s winner was Orla Devlin from Altahalla, Clonmany, Co. Donegal

The Winning Streak TV Gameshow is based solely on chance and there is no skill involved. To enter, players must submit a 3-star ticket in one of the special 3-star envelopes, which are available from all National Lottery Retail Sales Agents. On the Thursday preceding the gameshow, one hundred 3-star entries are drawn randomly in a preliminary draw that takes place under strict security controls in National Lottery offices. From these 100 entries, the five players for the following show are drawn and their names are featured on the gameshow.