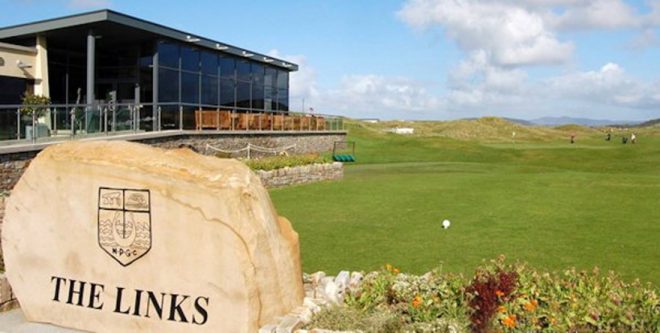 THREATS that Narin and Portnoo Golf Club will cease golf operations from Monday next have been lifted, for the time being at least, the Donegal News has learned.
Earlier this month the club’s new debt holder, who rescued from the brink of closure last year, warned that he would close the course from Monday, October 23, amid concerns that the council and majority of the trustees were ‘working against him’.
Liam McDevitt, originally from Ballyshannon but who now lives in Connecticut, purchased the club’s loan book from Cerebus earlier this year after Ulster Bank had transferred it to the US investment firm last year. In August, the members voted for its Captain and Vice-Captain to complete negotiations on their behalf with Mr McDevitt.
Although progress had been made as it relates to members’ privileges, the businessman claimed that nothing had been accomplished when it came to finalising the legal terms required for such a transaction in what he admitted had been a ‘challenging couple of months’.
However, it would appear that his threat to close the course has had the desired effect and concentrated minds.
Speaking to the Donegal News yesterday, Thursday, Club Captain Mr Kevin Gilgunn, confirmed that the immediate threat of closure had been lifted.
Agreeing that the issue has taken too long to be resolved, Mr Gilgunn called on members to support Mr McDevitt’s plans.
“Things are starting to look up. A lot of negotiations have taken place since Mr McDevitt’s email to the club first became public knowledge two weeks ago and, hopefully, there will be a successful resolution. What I can say is that there the course is under no immediate threat of closure and we’re moving in the right direction with regard to resolving ongoing issues.
“Ultimately though it up to the members to decide again what they want and they’ll get the opportunity to do that at an EGM which will probably be called towards the end of the month,” Mr Gilgunn said.
In his email to the club Mr McDevitt stated that he was not prepared to underwrite any losses brought about by other people’s actions.
As a result, Mr McDevitt said that he has had to put on hold a number of plans for the club. These include equipment investment, a marketing plan by Carr Golf, a masterplan prepared by a world renowned Golf Architect and employing the grounds staff over the winter months to complete projects that would enhance the members playing experience.
“It’s unfortunate that a select few are standing in the way to securing the future of Narin & Portnoo Golf Club for years to come. The members are in control of their own destiny and should use the voters of Catalonia as inspiration,” he wrote.

LK Credit Union has the Solution to your Debt Woes

There are always times in life when people will find themselves having to juggle a number of different debts....

Top Donegal golf course may soon be out of bounds

On October 23rd, 2017, I will exercise my legal rights which will result in the immediate closure of the...

The company will forgive all outstanding debts owed to it by the club and allow the members to use...