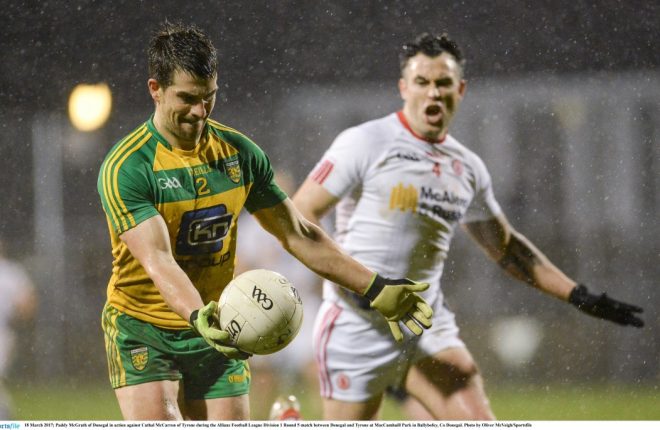 Paddy McGrath kicking a point against Tyrone earlier this year

Paddy McGrath is determined to put his cruciate ligament woes behind him as quickly as possible.

The Donegal defender feared the worst when his left leg went from under him in his club side Ardara’s championship clash with Gaoth Dobhair two weeks ago.

His consultant, Dr. Cathal Moran, has advised against surgery and instead put the 2012 All-Ireland winner on an intensive rehab programme that starts this week as the swelling subsides. He is crutch free but has a protective brace on to keep all load off the injured knee.

“It’s the PCL which isn’t as bad as the ACL,” McGrath explained. “There is no damage to the ACL. Dr. Moran has told me to get stuck into building up my quad, hamstrings and calves. It’s about firing up all those muscles now around the knee to offer stability and protection.

“We’re still talking about a lengthy layoff. But the timeframe now does allow me to really get stuck into it. I’m gutted that I’m missing the club’s (championship) relegation battle. It’s hateful but I just have to get on with it. I have that time over the winter to work on it. I’ll be giving it everything I can.

“It’s about coaxing it along now and seeing how it reacts.”

In recent weeks, there had been some speculation and whispers that McGrath was planning on hanging up his intercounty boots. He dismisses that talk straight away.

He said: “Absolutely not… no way. I don’t know where that came from. Again, it’s about getting the knee right. I’m only 28, turning 29. But last year, even with the way it turned out, I’ve seen enough in the youth to know there is still a very good team there.

“Last year will only bring them on.”

While not directly pressed on the individuals involved in the race to succeed Rory Gallagher in the Tir Chonaill dugout, McGrath did say that whoever does eventually take up the reins is inheriting a panel of players that can be a force once again, inside the province at the very least, as early as next season.

“Without a doubt,” he continued. “Whoever takes over will know that we’ve still serious quality in Donegal. Things didn’t go well this year but it will only bring those young lads on. I have absolute faith in all those fellas. We’ve all been there.

“I’ve been there. First season, it can be a daunting. Believe me, they’ll be a lot more ready for it in 2018. Supporters should be excited. These lads can develop and be that good.”