A retired Donegal mechanic, who is due to turn 90 next month, has no intention of slowing down any time soon.
Two weeks ago, Stranorlar grandfather Johnny Patton took delivery of a brand new electric bicycle from Letterkenny Bikes and last weekend he took it on its maiden journey across to Donegal Town – a 30-mile round trip from his Twin Towns home.
He was joined on the cycle by his daughter Grainne McDermott, sons Mark and Paul Patton and Paul’s wife Liz.
“He’s an amazing man. He really is. He keeps us all going and has great energy. He’s unstoppable,” Grainne explained.
Johnny’s wife Bridie (nee McGowan) has Alzheimer’s and has been a resident in St Joseph’s Hospital, Stranorlar, for the past two years.
“He was mum’s full time carer before she was moved into St Joseph’s. He now lives alone with his dog Jessie, a two-year-old Jack Russell, but the four of us all live close by,” she said.
Johnny visits his wife daily, a journey which he often takes by bike, while he also likes ‘tinkering about’ with old Honda 50 motor-bikes and bicycles in a shed at the back of the house.
In the 1950s Johnny drove double decker buses in Dublin before coming back to the Twin Towns where he took up employment as a mechanic in Finn Garage, Dunnions Garage and then, most recently, in Mulrines Bottling Stores for twenty years before his retirement. A six-berth camper van and car sit side by side in the driveway of his home while the new Raleigh Strada three-speed electric bike is stationed in the hallway.
The state of the art machine also comes with hydraulic disc brakes and shock absorbers as well as a ‘power boost’ switch which is particularly useful which it comes to negotiating steep hills.
Johnny says the secret to his health and longevity involves smoking the odd cigarette, hard work and remaining very active. It’s the ingredients which his three sons Paul Mark and Stephen, his daughter Grainne and his ten grandchildren hope will carry through into their genes. Cycling is a passion that he shares with his children. His three sons are members of the Finn Wheelers Cycling Club while Grainne is with Letterkenny Cycling Club.
‘Papa Johnny’ as he is affectionately known by his grand children is at ease pedalling away and he’s keeping the whole family young.
“I had a High Nelly when I lived in Dublin and used to do a bit of cycling then but I’m just getting back into it again now,” he smiled. 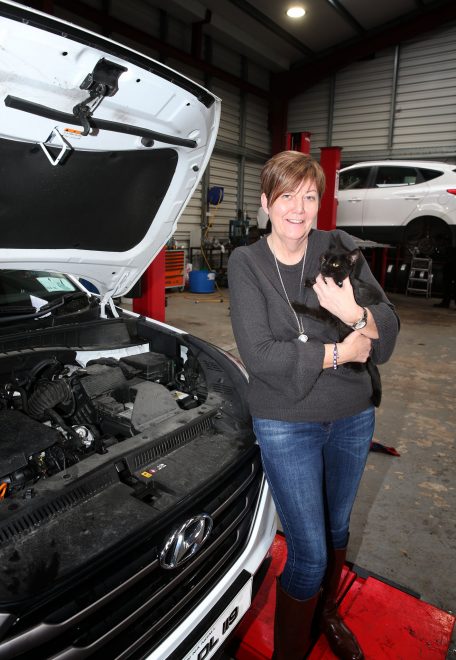 Car engine was purring for a very good reason

Five-month-old cat, which has been renamed Lucky, had just been found trapped in a car engine when the mechanic...