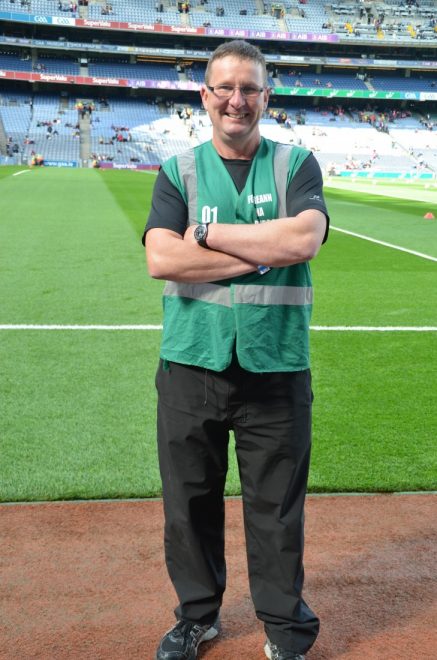 NAOMH Muire’s Hughie O’Donnell was one of a number of groundsmen from up and down the country who were working on the Croke Park pitch at last Sunday’s All-Ireland Senior Football Championship final.
O’Donnell is part of a group of volunteers who help keep the ‘busiest pitch in the world’, one of the best pitches in the world throughout the year.
Speaking to the Donegal News this week Mr O’Donnell, who operates his own Groundwork and Landscaping Service in Annagry, said that he is delighted to be able to help out on big match days.
Married to Anne Marie, the couple have four children – twins Katie and Michael, Megan who is a teacher in Dublin and Colleen who is Nursing at LYIT.
On Sunday last he was working with the ground staff on the pitch as he is part of a group of pitch maintenance people who receive training on ground maintenance from the main contractors in Croke Park. He was also on duty for the recent All Ireland Hurling final.
“Pitch maintenance is an area that interests me and I’m part of a team who are working to make the pitch at Naomh Muire as good as we possibly can,” he said.
“Croke Park pitch manager Stuart Wilson, who previously worked with Aston Villa, says that he’s never seen an atmosphere like the one in Croke Park and I would have to agree with him,” he added.
Charlie ‘The Yank’ Boyle is Health and Well-being Officer with the Naomh Muire club. He said that Hughie and his team have carried out ‘invaluable’ work around the grounds at The Banks, Mullaghduff over recent years.
“You can go past the ground at 7am and you’ll see Hughie, Michael Gallagher, David Devlin, Chris Devlin or one of the other lads working at the pitch.
“We host the All Ireland Gaeltacht finals in 2021 and we’ve set ourselves a target to make the playing surface at Naomh Muire the best in the country by then. It’s a lofty ambition but one that we feel we’ll be able to achieve.
“As a club we’re only in operation for thirty-seven years but a few years back we decided to put in place a plan to make the club the best club that we possibly can – both on and off the pitch.
“There’s been too much talk of emigration and no jobs about the Parish but that’s just an excuse. It’s up to people on the ground to drive the club forward – people like Hughie O’Donnell who do trojan work,” he said.
“We’re all trying to raise the bar and get things right both on and off the pitch. If a club somewhere has floodlights we asked ourselves why don’t we? If they have strength and conditioning rooms and equipment – why don’t me? In the next five years we’ve set ourselves the target of being the best club in the country,” he added.
Another Naomh Muire stalwart, Calhame’s Donal Sharkey was a Croke Park last weekend to put Hughie in the picture.