Advertisement
HomeHeadlinesDonegal man vows to continue with hunger strike
Advertisement
A FORMER Donegal Independent Election candidate has vowed to remain on hunger strike until the entire Oireachtas Committee on Abortion has watched a video, he has chosen, of the procedure.
Tim Jackson has been on anti-abortion hunger strike outside Daíl Éireann since Monday, demanding Taoiseach Leo Varadkar and the Oireachtas Committee on Abortion view the video before any discussions around a referendum on the 8th Amendment proceeds.
Today, Mr Jackson said he received a response to the open letter he had penned to government officials. In written confirmation from the Chairwoman of the Oireachtas Committee on Abortion, Catherine Noone said she had watched  the video, and Taoiseach, Leo Varadkar “had no difficulty watching it”.
The Ballybofey man said his central demand is that the entire committee watch the video before going any further with plans for a referendum on the 8th Amendment.
Mr Jackson said although the correspondence is a “step in the right direction”, he plans to keep going until the video is watched in session. Mr Jackson, as this, he said, will verify the committee has watched it.
Mr Jackson is continuing his protest outside Daíl Éireann every day from 10am to 7pm.
Speaking to the Donegal News, Mr Jackson, who ran in the last General Election, refuted suggestions he is embroiled in a ‘farce’, but admitted his plan does not involve taking his hunger protest ‘to death’.
“I think the least we all can do is know exactly how the child is killed, as it unmasks the reality of abortion in a debate clouded with euphemisms. It is a prerequisite for having a fully informed debate.
“I’m very weak on it to be honest, every day is getting harder and harder,” he said.
“People will decide this as they will, but I am only taking water. I’m very much taking it one day at a time. I have made it clear that I am not doing this to the death.
“People have done similar for issues like water charges and for Shell to Sea,  and no-one called it a publicity stunt. This is not a publicity stunt. This is about preserving life. I have been to Syria and other places were murder just happens and that’s it. I don’t want to live in a country where other human beings are being killed, and being killed before they have even had a chance to live.
“All humans have an equal right to life. Denying them this goes against democracy and we do live in a democracy, don’t we? Taking away life goes against the very principle of democracy.”
The Donegal politician said he wants to give a voice to all unborn babies.
“How many of them even care that the child is incinerated, as if they never existed. There is no outcry over a human being that’s being killed or being denied a grave in this instance; there’s actually political support for it.
“We also have a Minster for Children who has brought her office into disrepute by calling for a repeal which would stop children in the womb of their natural right to life. Choosing which human beings can live and die is unacceptable, and they won’t get away with this.”
Despite outcry in some circles over his actions, Mr Jackson said he has received resounding support on the ground.
“I have had support from people around the country and here in Dublin who have said what I am doing is reasonable and they support it.
“My family have also given me their support.”
However, those behind Inishowen Abortion Rights Campaign group have accused Mr Jackson of being “opportunistic” and have claimed he is being “insensitive”.
Spokesperson for the group, Cathleen Shiels said his actions are a mockery to the memory of Republican prisoners who died on hunger strike in 1981.
“Tim Jackson callously pretends to be on hunger strike when he is engaging in a farcical media stunt.
“The vast majority of abortions take place before nine weeks – which means they are akin to a heavy period rather than the late term abortions portrayed in the video Jackson champions.”
Ms Shiels said 62 Donegal women travelled to access abortion services last year.
“Irish women are forced to have later abortions than their English counterparts because they must delay treatment in order to save money to pay privately and travel.
“The irony of forcing women to travel to England to avail of services our Republic refuses to provide is clearly lost on Jackson, who mocks those who have died throughout the course of our history to secure our rights, by pretending to go on hunger strike.” 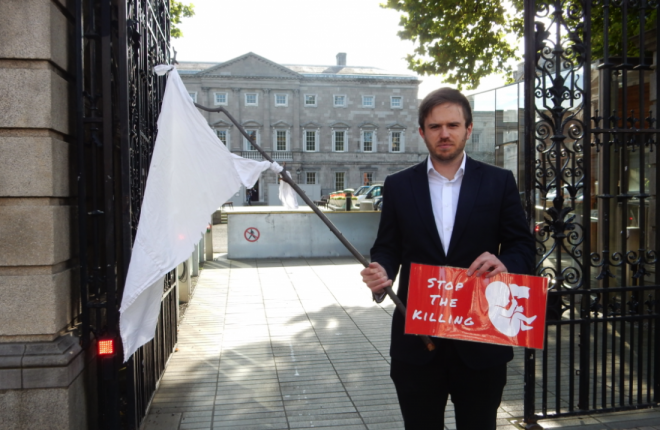 Donegal man Tim Jackson launching his hunger strike outside the Dail in Dublin this morning.

Cope will not be ‘forced’ into supporting legislation

Pat The Cope's stance could bring him into conflict with the party leader Micheál Martin, who supported repeal of...

DONEGAL Pro Life have spoken out in support of Tim Jackson, the Ballybofey activist who has been on hunger...