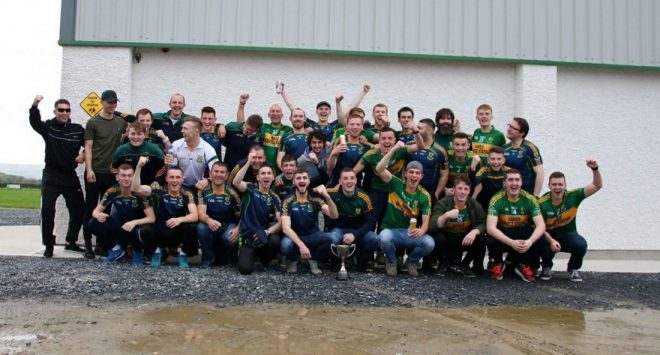 ST MARY’S Convoy will be playing Division Three football for the first time in twenty-one years in 2018.
If follows last weekend’s comfortable 4-10 to 0-1 win against Carndonagh in Inishowen, a result which clinched the Division 4 League title.
Laurence McMullan’s men dropped just three points throughout this year’s campaign and with a Junior A Championship semi-final to come against Red Hughs they’re greedy for more silverware.
It’s been a great year all round for the Convoy club as their reserve team secured the Junior B Championship title two weeks ago to go with them wining the Reserve League title.
“I’ve been playing Division 4 football since I started in 1998 – I thought it was a life sentence,” McMullan quipped this week.
“I’ll be thirty-four next week and apart from my brother John Anthony the oldest player in the squad is Liam Prunty who’s twenty-six,” he added.
Joined by Paul Lynch, Conor McDermott and Pauric Gallagher on the sidelines, McMullan is full of praise for both his mentors and the players.
“I’ve been managing under-age teams for the last ten years or and wasn’t expecting to be handed this job so soon as I was still playing. We’re delighted to win promotion. It’s a great boost to everyone involved with the club and we’ll try to push on next year,” he said.
Milford and Burt were two clubs that Convoy would have played league football against in the not too distant past and McMullan is hoping that they can replicate their successes – both on and off the pitch.
“We played them not that long ago and they’ve gone on to show where a wee bit of effort and quality can take you. They’ve both made great strides in recent years and we could worse than take inspiration from them both,” he said.
Reflecting back on the league success, McMullan admitted that his team put themselves under pressure from day one after they lost their opening fixture against Na Rossa.
“We know from previous years that you can only afford to lose two games if you want to challenge for league honours while the second place team can lose no more than three games. Newtown, who missed out on promotion to Na Rossa, have only lose three games all year but didn’t get up.
“After the Na Rossa game we found ourselves under pressure but fair play to the lads. They put their heads down and gave it their full commitment and they got their rewards last weekend,” he said.
“John Anthony was part of the team the last time we got promoted in 1996 while he came on as a sub a few times for us this year too,” he added.
There’s a very youthful look to the St Mary’s team these days with Paddy Dolan, a member of the Donegal Minor panel, driving them forward. Goalkeeper Sean Patton, Bryan McNamee (who is also a talented boxer) and Conor Patton were the other three members of the club’s minor player to come through to play senior football this year.
“Paddy and the other young lads have been a great asset for us this year with their pace and quality. It’s important that these younger lads get the opportunity to play a higher level of football and get away from Division 4. Most of them have played their underage football in either Division 1 or 2 and we need to push to a higher level.
“We won the Junior B title for the first time two weeks ago. We had a Reserve team for the last 13 to 14 years and this is the first league that they’ve won. We’ve used about thirty players for the first team this year between holidays an done things and another but they’ve all put their shoulder to the wheel,” he said.
Following that disappointing opening day defeat in Dooey, St Mary’s have dropped just one more point (also against Na Rossa) on their way to winning twelve of their fourteen matches. It’s somewhat fitting therefore that Na Rossa will also be playing Division Three football next season.
The season isn’t quite over for McMullan and his young charges just yet though as they’ve a Junior A semi-final meeting with Red Hughs to look forward to on Saturday afternoon next.
“There’s only four teams left in the Championship and we feel that we’re as good as the other three,” he said.