Advertisement
HomeBreaking NewsKilcar, the home of both football and Hole-ball
Advertisement

KILCAR’s Minor footballers will contest the Minor Championship final tomorrow afternoon while the club’s Seniors are just sixty minutes away from securing a spot in the County final for the second year in a row.
Football is synonymous with the Parish and Towney is home to the likes of the McHughs and McBreartys – all of whom have gone on to wear the green and gold Donegal jersey with great pride in recent years.
The television cameras were in Kilcar last week ahead of Sunday’s Championship quarter final meeting with Bundoran – a game that was shown live on Eir Sport – but it wasn’t the first time that the cameras were in this particular part of South West Donegal this summer.
In early August, footballers from previous generations including Maurice Hegarty, Michael McShane and Kevin Lyons took centre stage as they engaged in a game of holeball along the village’s main thoroughfare.
Hole-ball is an old road game dating back to the early 1800s. At that time roads were like a green carpet and easy to play on as there was little or no traffic except for some cattle and donkeys that would eat the grass.
According to Denis Lyons of Cashel, the game was initially brought to the area by the Scottish and English Coastguard who lived in the townland of Kilbeg.
Young and old men would have watched and learned how to play this game when they were over at Cladnageragh fishing. When the men of the neighbouring townlands had all the rules of the game learned they began to play each other and then it was played from one generation to another on certain parts of the road.
When Denis Lyons was a young boy he often watched teams of older men playing Holeball at a place called Bun a’ Lane in the townland of Cashel.
Back in the 1940s GAA games had been played on certain fields in the Parish such as in Srath Mongán in the glens of Baile Dubh, also in Máire’s Park, Cashel, Rose Ann’s Park in Derrylaghan and on Towney strand. Then the Holeball games gradually died out.
However, last year Denis got a phone call from the Aislann Centre in Kilcar to met Joe Mahon of “Lesser Spotted Journeys” who asked him if he knew of any old traditions in the area that is not seen or heard now.
Two teams were organised to play a game of holeball and, after a few practice games in the Aislann Centre and on the road at Bun a’ Lane, filming took place.
“The film crew arrived in Kilcar on December 5 for three days and the Holeball game was filmed on December 7. It will be seen on UTV on September 25 or October 2 at 8pm,” he said.
In more recent times the teams were asked to take part in the Street Festival in Kilcar. On Sunday, August, two teams of six took to the ‘pitch’ to play for the Glór na gCaiseal Cup. As far as local know it was the first ever game of holeball to be played on the Main Street in Kilcar.
The two team who took part were Kilcar holeball team and Longshore holeball teams. The teams were well matched and the score was Longshore 8 aces, Kilcar 7 aces. A very enjoyable game was had by all.
The teams were as follows: Longshore team: Paddy Gallagher (captain), Michael McShane, Maurice Hegarty, Kevin Lyons, Donal Kelly and Connell Cunningham. Kilcar team: Tom Glynn (captain), John Joe McBrearty, Kevin Barnes, Ciarán Cunningham, John Kelly and Trevor Doherty. The referee was Denis Lyons. 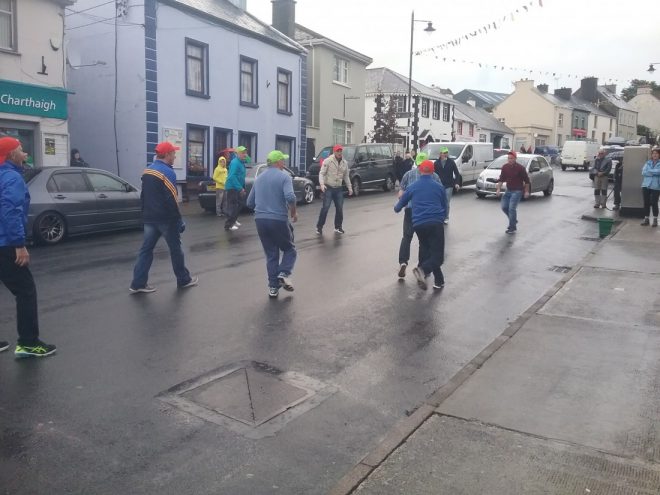 The game in full swing along Kilcar’s Main Street.