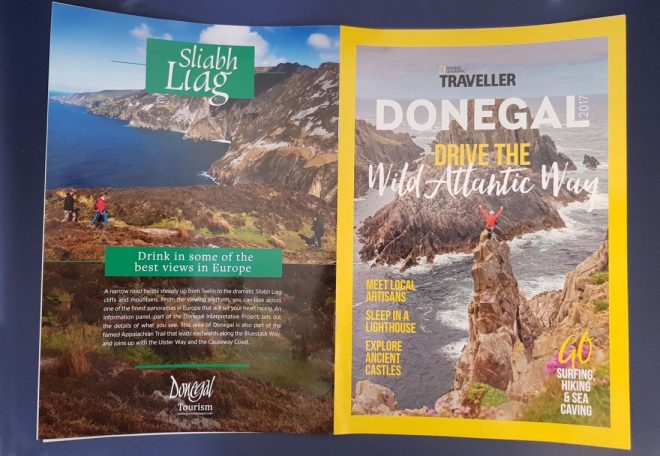 The Donegal magazine published as part of the latest National Geographic Traveller edition.

THE world’s most influential travel magazine, National Geographic, has used its latest edition to tell a global audience why Donegal is the ‘Coolest Place on the Planet’.

In a 20 page magazine, National Geographic waxes lyrical in 40 different languages to its 20 million readers about the county’s top tourist attractions.

It is eight months since National Geographic pinned the North West of Ireland to the top of its ‘Cool List of Places to Visit in 2017’, ahead of Helsinki, Santiago, Canada, Peru and New Zealand.

“Donegal holds enormous appeal for intrepid travellers so it was no surprise it took the top spot in our Cool List 2017.

“With a sea stack-dotted coast, Blue Flag beaches and rugged offshore islands, it begs to be explored,” Ms Cavagnaro said. 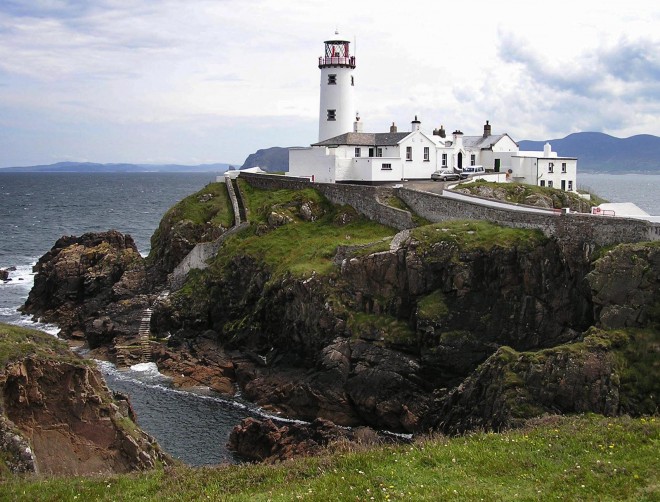 The ‘Coolest Place’ crown has, predictably, led to a significant hike in tourist numbers and CEO of Tourism Ireland, Niall Gibbons said it was the sort of publicity that could not be bought.

“The 20-page supplement on Donegal in the September edition of National Geographic Traveller is truly invaluable publicity – showcasing the spectacular Donegal landscape to thousands of potential British holidaymakers and positioning Donegal as a highly desirable place to visit,” Mr Gibbons said.

Neil Faulkner is manager of Inishowen Tourism, one of the areas that has benefited most from the recent boost in visitor numbers.

And with the new Star Wars movie, part of which was filmed at Malin Head, due out later this year, those figures are expected to continue to rise into the future.

Neil Faulkner said that undoubtedly, Donegal’s tourism industry was on the crest of a wave.

“It has been a really good time for us when you consider what has been happening in Donegal lately,” he said.

“The new Star Wars movie is due out on December 15, you have the Irish Open coming to Ballyliffin next year and you have the Clipper Challenge coming to Greencastle.

“There are so many positive things happening in the county at the minute and hopefully that continues,” Mr Faulkner added.

Some of what National Geographic had to say…

Deep in Donegal’s south west Gaeltacht, its Irish-language enclave, this community project was established 50 years ago to safeguard local culture against rural poverty and emigration.
Today a sprinkling of quaint, whitewashed and thatch-roofed cottages make up the village featuring original artefacts that retell three centuries of local heritage.
Explore the schoolhouse, pub grocer and fisherman’s hut before stopping at the craft shop to try traditional artisanships like rope-twisting and fishing net-mending.

Overlooked by the Derryveagh Mountains, this spectacular protected wilderness is every walker’s dream with its tumbling waterfalls and mossy woodlands that cast reflections in the shimmering Lough Veagh.
From the visitor’s centre, follow a lakeside footpath to reach the turrets of Glenveagh Castle before joining a dirt track into rock-ruptured bogland enswathed in purple moor grass to the glen summit. Keep your eyes peeled for golden eagles and red deer, both elusive residents of the parkland. The return journey can be cut short by hopping on the shuttle bus between the castle and the car park or extended by following signposts to an upper viewpoint. 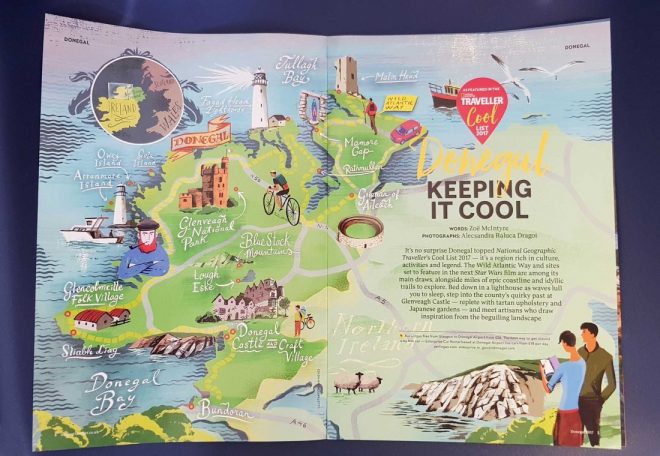 An excerpt from National Geographic’s focus on Donegal.

Hop on the ferry to reach Arranmore, Donegal’s largest offshore island, that has been inhabited since the early Iron Age. A walking trail circles its ragged northerly coastline, indented by dramatic sea stacks, hollowed-out caves and sandy spits before it cuts through wild and uninhabited interiors. Keep watch as corncrakes, snipes and storm petrels soar overhead as you hike.
Don’t miss remnants of a prehistoric fort that can be spied on the southern eastern corner, while the sheltered eastern side brings an opportunity to interact with the friendly locals – many of them Irish speaking – and there are overnight stays available for anyone keen to linger longer.

This waymarked route is the first leg of the International Appalachian Trail which starts in the Ulster province of West Donegal and finishes in Antrim. From Bunglass Point, which packs a punch with its audacious vistas of the soaring Sliabh Liag cliffs, watch your footing along an exposed and tricky trail towards the crescent beach at Malin Beg and the impressive megaliths of Malinmore.
Further on, the pretty Gaeltacht hamlet of Glencolmcille makes a good resting spot before striding onwards to Ardara where you can sample the craic in fire-warmed pubs alive with the melodious strains of bodhrán and fiddle. The finish is 7.5 miles away in Glenties set against a superb mountain backdrop.

It takes several days to skirt the foothills of the Bluestack Mountains. Beginning in Donegal Town, a trail passes the bewildering beauty of Banaghar Hill and Eglish Valley.
Expect high moorland terrain between Binbane and Cloghmeen Hill then a stretch along the Owenroe riverbanks before reaching Ardara.