WORKS to tackle an ongoing problem of illegal dumping at a recycle bank in Gaoth Dobhair are to be stepped up.

The move comes in the wake of an incident in recent days in which dozens of bags of rubbish were illegally discarded at the site, many of which were ripped open with their contents strewn on the ground.

The incident has led to renewed calls from local people for tougher sanctions to be handed down to those who illegally dump their rubbish.

It’s understood CCTV cameras in the area have not been working since last summer.

Large numbers of people took to social media in response to the latest incident to voice their disgust, calling for more regulation and prosecution for those responsible. Some commented the problem is not confined to Gaoth Dobhair, with nearby places also blighted by the same problem.

Speaking to the Donegal News, Independent Councillor Micheál Cholm MacGiolla Easbuig said the situation is spiralling out of control.

He said the onus is on every member of the community, not just the Council, to ensure areas remain free of illegal dumping, and has called for action to be taken with immediate effect.

“I have approached the Council in relation to illegal dumping and the upgrade of our bins,” he said.

“I was told that this particular site was going to be upgraded. My understanding was that that was to be done before the summer, yet here we are in August and nothing has been done with it. We were to get new bins, a new concrete slab and CCTV.

“This is an ongoing issue in Gaoth Dobhair.”

A spokesperson for Donegal County Council said it is envisage works are to begin in the immediate future.

“The site is frequently monitored by the Litter Warden and Mobile Litter Unit throughout the week and cleaned as required.

“Procurement is underway to deliver improvements to the site and works will commence as soon as possible.” 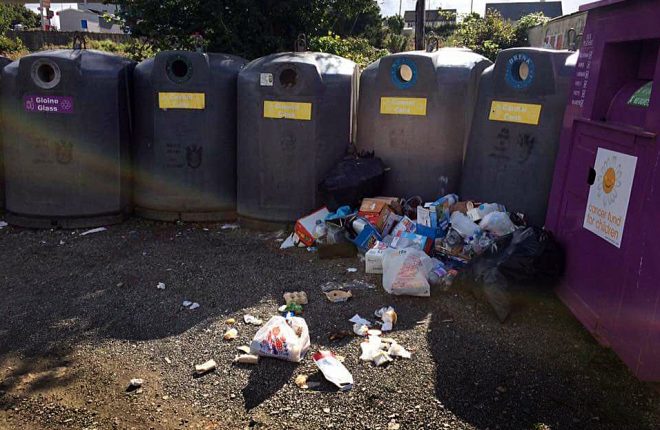 Bags of rubbish which were illegally dumped at a recycle bank in Gaoth Dobhair in recent days.