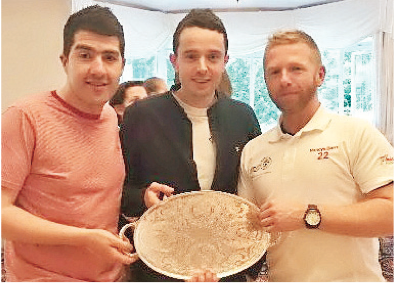 Derek Walker & Christopher Molloy pictured with Kieran Duey of Nancy’s Barn Ballyliffin & newly crowned World seafood chowder champion, who will be on stage giving a cookery masterclass at Off The Street Food Fest this July 29th and 30th.

FOR the first time the Lemon Tree Restaurant has teamed up with the Letterkenny Artisan Market for the two-day ‘Off The Street’ food festival celebrating Donegal’s wonderful array of offerings. Cookery demonstrations, live music, talks, local producer stories and a host of Donegal street food will all whip up what is guaranteed to be a festival not to be missed.

The pans will be fired up on Justice Walsh Road, behind the AIB, Letterkenny on Saturday, July 29 with the official festival opening at noon. Derek Walker, one of of the organisers, told the Donegal News how excited they are for this weekend, describing it as a ‘true celebration of Donegal food and produce.’ He said: “This is the first year of the food festival and we cannot wait to get it started. We have some amazing chefs and produce that we can’t wait to show off.

“From our experience with the artisan markets and Chris Molloy’s culinary skills, we know what producers want, what ingredients they want to use and what customers want to eat. We have some of the country’s greatest chefs, who are all from Donegal, who will be giving talks and cooking demonstrations to give their audience an idea into the person behind the produce, as well as loads of other things for the whole family to enjoy.”

Agri-aware will be there on Saturday, with their mobile farm. Children and adults will be able to pet baby ducks, chicks, calves, sheep and pigs while asking questions on farming. There will be food stalls, face painting and live music for young and old to enjoy. John from Ballyholey Farm will be telling his story from 12:10pm followed by music from Oisin Nee. A talk on how to grow your own OURganic garden begins at 1:05pm before a cookery demo by Gary M Peake and music from Dean Maywood.

At 2:40pm it will be the turn of the Haven Smokehouse to give a talk before Mary McLoughlin takes over with a cookery demo at 3pm. Figgs Sanchez will be centre stage at 3:55pm ahead of a discussion with Derek from Simply Natural Health.
Fresh from his victory in America, world chowder king Kieran Duey will be doing his thing before Harry’s Restaurant’s head gardener Noel steps up to the hotplate.

On Sunday things get under way from 12:30pm before music by Figgs Sanchez. Further food talks will take place throughout the day from Maurice McGeehan, Gareth Austin and the festivals co-organiser, Chris Molloy. With lots more to do see and do, you will not want to be anywhere else that Letterkenny this weekend. Admission to the food festival is a tasty €3 or €5 per couple. 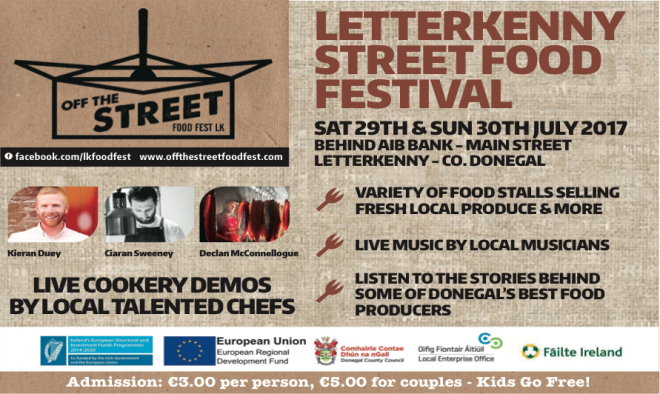