SIDELINES
This is his first year watching Donegal from the sidelines. Does he miss it?
“I don’t understand people who say that football isn’t enjoyable anymore. I don’t understand that mentality of doing something for so many years if you don’t enjoy it.
“Once Daisy came on the scene together with the work and studies my time was limited. I didn’t mind the training so much it was more the meetings, the video analysis, the gym sessions. When I started checking my watch to see when it was over I knew then that I wasn’t getting as much enjoyment out of it as I should. If you’re going to do something you have to enjoy it – one hundred per cent – and I felt that it was time to go,” he said.

REGRETS
An All-Ireland winner in 2012, Eamon also played in the 2014 final defeat at the hands of Kerry. Any regrets?
“We’ve all got regrets. It’s how you deal with them. Some people toss and turn at night saying that they should have done this or that.
“Maybe if Donegal had taken things seriously – at the level we did for the past five or six years – we may of had a bit more success but that’s the journey we went on. We messed about for the first few years and only had a National League title to show for our efforts and that is a regret of mine but I’m at ease with it. I can sleep at night as it was part of the journey,” he said.
PRESS BOX
This year he started a weekly column with the Irish Daily Star. All of a sudden he’s no longer Eamon the footballer. Instead he’s Eamon the pundit.
“There have been things said about me since I started the column which have upset Joanne and people close to me but I have to accept that,” he said.
What about telling people what they want to hear or saying that black is white to raise a bit of controversy?
“I think you can only give your opinion and how you see it. There is no point going the way the wind is blowing for a sake of a few extra readers to the column. You have to stand by what you say and live with the consequences.
“I see a lot of that, even outside sport, where the people who shout the loudest get the most attention. It’s all about clicks on social media nowadays. They’re nearly rewarded for saying things which isn’t right.
“I think people should say what they believe rather that what they think people will want to hear to get a bit of controversy,” he added. 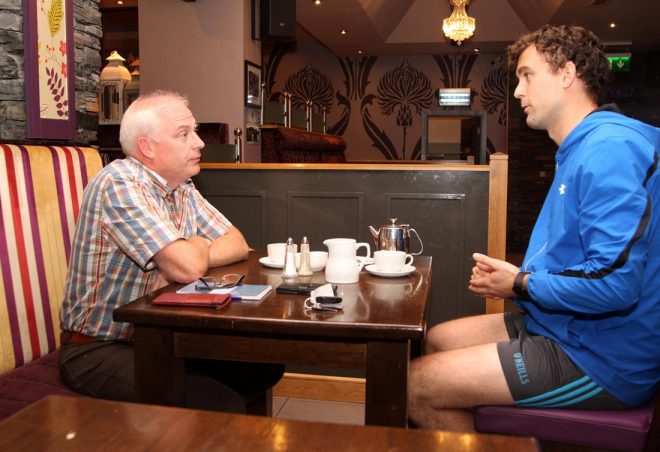 Eamon McGee and Harry Walsh in conversation earlier this week.

INTERVIEWEE
During his playing career, Eamon McGee was a reporter’s dream. Rarely, if ever, did he adopt the mundane scripted option.
“I always laughed at some of the lads who were like robots and threw out a few bits and pieces like ‘we went out and gave it our all’. I was always fairly comfortable with the media to say what I wanted to say although it sometimes got me in trouble with management.
“I might have been too revealing in terms of what we were up to – tactics wise – in the early days but I soon learned how to say how I felt without giving the game away too much,” he smiled.
Indeed, McGee was one of the few Donegal players who always took the time to speak with reporters post match – win, lose or draw.
“That was very important for me personally. We were quick to go out and get interviewed on the good day when people were patting you on the back but you can’t hide away when you’re disappointed or when things don’t go your way. You have to take it on the chin and move on. “Of course we were feeling sorry for ourselves but you can’t just ignore reporters either,” he said.
Since moving into the press box, he’s got a different perspective on the life of being a sports hack.
“Local media – sometimes – feel they have to watch what they say but I don’t think any media should be like that. If they see Donegal playing badly you have to call it. You shouldn’t be afraid to call it.
“I know that if you say something bad about Donegal many of the lads would take a huff and if you can’t chat to the County lads then that is your bread and butter, but I do feel that we (media) can only go on what we see and we have to make that call. No one is out to get the players. There’s no agendas. It’s not us against them,” he said.

DONEGAL 2017
Given all of the above what does he think about the team of 2017 and their chances against Meath this coming weekend?
“Everyone was pessimistic at the start of the year but the lads went out and proved the doubters wrong. They played a nice brand of football throughout the league and did well against Antrim before coming crashing down against Tyrone.
“It’s a tough lesson for the young fellas to find out that, maybe, they’re not quite a good as they thought they were. It means that they’ll have to work a wee bit harder. That said, they’ve good lads around them like Michael (Murphy), Neil (McGee), Frank (McGlynn) and Paddy (McGrath) to guide them and help them along,” he said.
Reflecting back on last weekend’s Longford game, Eamon admitted that they struggled to impose their game on Division Three opponents.
“Confidence was very low. They took a tanking against a Tyrone team that they would have viewed themselves as being better than. It’s all in the head now.
“They look a bit jaded – tired physically and mentally worn down – but a wee run in the qualifiers would do them the world of good,” he said.
Next up is a game in Navan against Meath, a team that Donegal have only met twice before in Championship football.
“Both teams have taken a fair tanking this year – Donegal against Tyrone while Kildare hammered Meath. They’re two teams who are brittle enough at the moment and it’s all about whoever smells blood the quickest this weekend.
“If Donegal play anything like they did against Longford they’ll probably lose. That’s the fact of the matter but if we can get the right men going – the likes Michael (Murphy) and Ryan (McHugh) – then we should have enough to beat them.
“You have to remember that we’re still a top six team and we’re better than Meath on paper. If we go back to what we’re good at doing we should be okay,” he said.
“It’s all mental now. The physical work has been done. The lads have all put in big shifts this year. They’re all fit. It’s now all about self belief and how they see themselves,” he added.

GAOTH DOBHAIR
Eamon will have to content himself with a place in the press box tomorrow evening before he returns to play for his club the following day.
“On paper, Gaoth Dobhair have as good a panel as any other club in Donegal. Now it’s all about getting a system that suits us and getting the players to believe that,” he said.
That system sees McGee lining out at the edge of the opposition’s square at full-forward and he’s enjoying the new role.
“I want to give a wee bit back to the club and I’m more involved this year, both on and off the pitch. We sat down at the start of the year and it was felt that we needed a bit more up front. You won’t be reading abut Eamon McGee scoring 1-8 in a game but I’m enjoying it. It’s not as pressurised and intense,” he said.

CLUB STRUCTURES
One aspect he’s not enjoying though is the ongoing fixture uncertainly that comes with being a club player.
“You can’t book your holidays. Joanne has booked a holiday for September but I can’t tell her when the Championship will be played. It’s not acceptable,” he lamented.
Since stepping away from the Donegal panel Eamon has also found time to play with his local soccer club Gweedore Celtic in the Donegal League.
“I can tell you their (Gweedore Celtic) fixtures for the next four to five months but with Gaoth Dobhair GAA club I haven’t a clue who we’re supposed to play in four weeks time.
“The organisation (GAA) employs full-time officials who should make this issue their priority. At the end of the day it’s GAA headquarters who have allowed this to happen. If the problem was unique to Donegal maybe we would have a gripe but it’s across the country and someone needs to step in now and take the responsibility of sorting out fixtures away from County Boards.
“The GAA says that it is all about the club player first when in fact, it’s shafting the club player. It’s hypocrisy,” he said.
McGee also believes that the county and club seasons will never be able to work as one.
“In an ideal world we would have an Intercounty season and then a club season but that won’t happen.
“Back to soccer, unless you have a very good excuse your match is never going to be called off on any given week. In the GAA, clubs are getting games called off because of a stag party!
“All I ever wanted to do was play football. As an Intercounty player that’s what happened but now that I’m a club player and I’m getting shafted and it’s annoying me.”