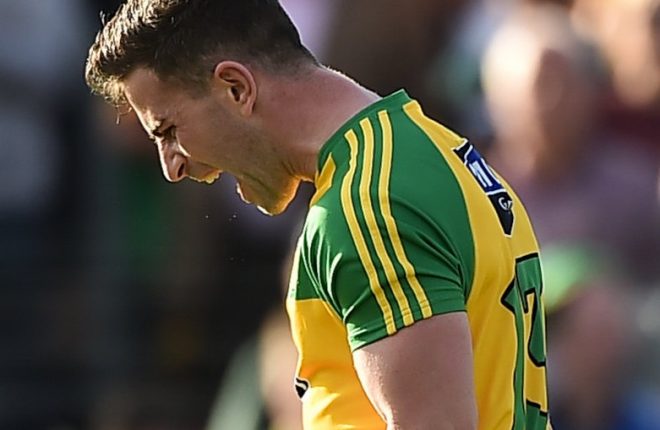 8 July 2017; Paddy McBearty of Donegal celebrates after scoring his side’s winning point during the closing moments of the GAA Football All-Ireland Senior Championship Round 3A match between Meath and Donegal at Páirc Tailteann in Navan, Co Meath. Photo by David Maher/Sportsfile

LAST week’s game in Navan might only have been a Round 3 qualifier, but the smiles on the faces of Donegal people after the match said it all.

It was a dramatic game that could have went either way. Donegal got the goal, then Meath hit back and nudged in front.

Michael Murphy looked to have won the match for Donegal, only for Donal Lenihan to equalise.

We were getting ready for extra-time, until Patrick McBrearty swung over from distance to grab the headlines.

Meath may feel that deserved twenty more minutes, but with the tension building, the Donegal players and supporters were glad to hear the final whistle.

It wasn’t quite Kevin Cassidy against Kildare, but it was a brilliant winning point, and it certainly made the journey back to the hills much shorter on Saturday evening.