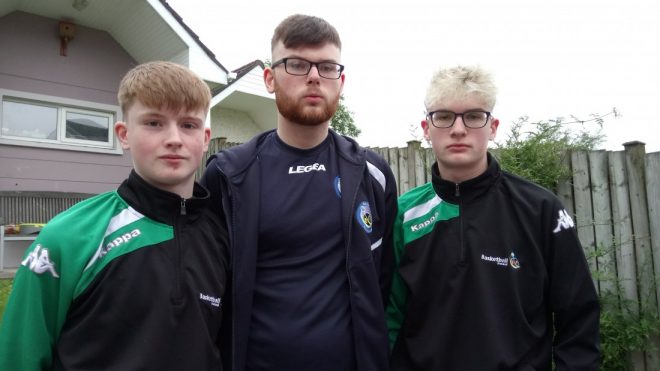 Mike and Max Leadley together with Luke Cassidy

IT’S been a busy start to the summer holidays for three young Letterkenny basketball players Luke Cassidy and brothers Max and Michael Leadley.
On Friday last Max and Luke headed for Luxembourg with the Irish Under 15 basketball squad for an International Series against Luxembourg while Max’s big brother Michael caught a flight from Belfast International with Basketball Northern Ireland’s U18 panel for a series of games against Derby Trailblazers Basketball Academy in the UK.
The Luxembourg series will bring a second cap for Max and Luke, who both won their first caps representing Ireland in an U15 basketball series against Wales in Galway on Easter Tuesday, which saw the Ireland U15 squad winning all three games played.
It was a hectic Easter as the appearance for Ireland was preceded by a trip to Spain on Holy Thursday when the two boys along with their fellow Letterkenny Blaze U16 boys team mate Adam Gillespie, played and won the Europa Tournament in Lloret Del Mar with the Basketball Northern Ireland U16 squad. The boys then joined their Letterkenny Blaze U16 boys team mates under Coach John Grant to play in the All Ireland Club Championships in Kerry.
This weekend will see Max, Luke and the rest of the the Irish U15 boys back on home soil where they are scheduled to play a third International series against Wales in Gormanstown.
Eighteen year old Michael, also a member of Letterkenny Blaze, was capped for Ireland last year in Dublin for his appearance with the Irish U17 team when Luxembourg brought their U17 squad to the Oblate for a three game series. He is also a member of the LYIT Donegal National League squad under Coach Niall McDermott who is also the North West Basketball Development Officer.
The boys, Letterkenny Blaze and basketball in the North West generally greatly benefitted this year from the LYIT’s involvement with the Sport Changes Lives programme which saw two Victory Scholars from America Jack Mackay and Stephen Casiello study at and play for the LYIT. The basketball scholars trained Letterkenny Blaze and LYIT teams as well as other clubs around the region for the duration of the2016 / 2017 season. North West Basketball are delighted that the LYIT is welcoming a new group of Victory Scholars to Letterkenny in September for the 2017 / 2018 season.
Max and Michael are sons of Adam Leadley and Attracta Winters, AL Architects, Letterkenny and Luke is the son of Ed and Marina Cassidy, Cassidy Accommodation, Ballyraine, Letterkenny. 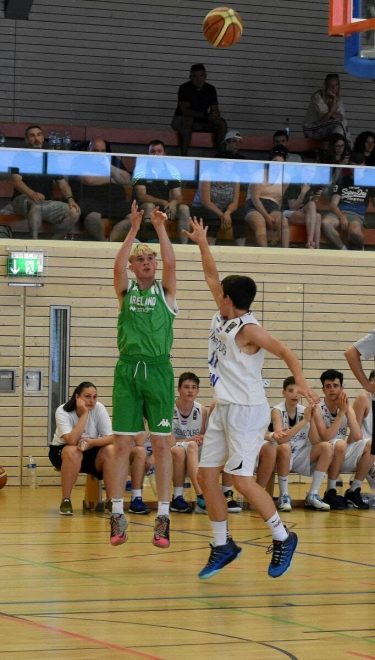 Max Leadley gets away his shot