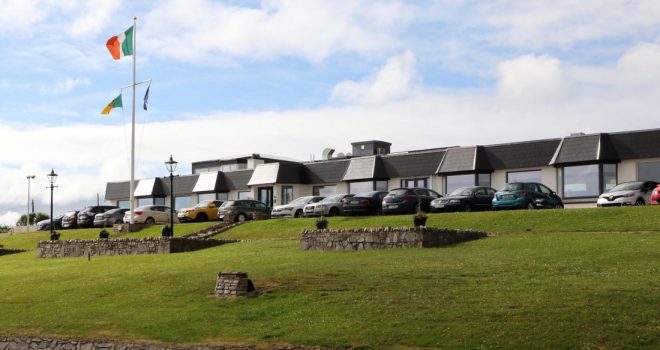 PLANS to develop a 25 metre swimming pool adjacent to The Waterfront Hotel in Dungloe have been shelved, the Donegal News has learned.
It follows confirmation that 24 workers employed on the €2.59 million leisure centre project have been laid off after the promoters failed in their bid to attract grant aid.
The competition-size pool was to be a base for lifesaving and lifeguard training in the area. It was also expected to compliment the newly opened 49-bedroom Waterfront Hotel that currently employs more than 60 people.
The hotel has been developed by the successful Chicago based businessman Kevin Boyle while a sister company, Inis Spa and Leisure Centre, spearheaded by his cousin Patrick J Boyle is behind the leisure centre project.
Speaking to the Donegal News this week, Mr Patrick J Boyle explained that the new multi-million project was to incorporate a spa and wellness centre, a health club/gym together with a 25 metre competition-size swimming pool and an 8.5 metre learners pool. “Dungloe is at the heart of the Rosses and does not have a 25-metre pool within almost fifty kilometres of the town.
“We put in motion a plan to develop the pool, knowing we would require some form of grant aid or financial input. Based upon a misguided belief we pressed ahead with the plans – although not breaking ground for the pool until we had something firm in the form a financial assistance proposal in place.
“Now it would appear there is currently no financial assistance forthcoming to complete a pool development of this magnitude. Consequently we are now re-assessing our position and the scale of the project, resulting in the dismissal of over twenty personnel, nine of which were on the live unemployment register for more than two years,” Mr Boyle said.
It was estimated that Inis Wellness Centre, Health Club and Pool would generate between 15 and 20 full-time jobs when fully operational and be a potential national showpiece as an example of environmentally green and carbon free projects.
“It remains our hope that, in conjunction with a multi-million Euro investment from the State, local bank loans and government grants, we can get this project back on track and get the locals back to work.
“This will benefit not only the people of the Rosses, but the entire region as this will become a destination for visitors from all over the world,” Mr Boyle said.
In the meantime, plans for a spa and wellness centre together with a health club/gym on the site are expected to be submitted to Donegal County Council in the coming weeks.
“All things being equal we will have workers back on site before the end of the summer, albeit to work on a much smaller project, unless we can get the original project back on track,” he added.