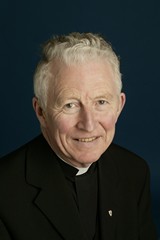 THE name of the new Bishop for the Diocese of Raphoe will be announced by Pope Francis in the morning it has been confirmed.
Bishop Philip Boyce turned 75 in January 2015 – the mandatory retirement age – and the dioceses have been awaiting the appointment of a new bishop since.
According to well placed religious sources the successful Raphoe candidate had been proposed to Pope Francis by the outgoing Papal Nuncio, Archbishop Charles Brown.
Raphoe becomes the first of seven of Ireland’s 26 dioceses currently awaiting the appointment of a new bishop to fill the post.
Speaking to the Donegal News earlier today Fr Michael McKeever, the Bishop’s Secretary, confirmed that the name of the new Bishop will be put into the public domain for the first time when he appears alongside Bishop Boyce in St Eunan’s Cathedral on Friday morning.
An e-mail communicating the name of the new Bishop will also be forwarded to the priests in the Diocese prior to the official announcement.
This afternoon, priests received an invitation to the Cathedral of Saints Eunan and Columba for Mass at 10am tomorrow, Friday, to celebrate the feast day of St Columba, Secondary Patron of Ireland.
“Bishop Philip Boyce, O.C.D., Bishop of Raphoe will be Chief Celebrant and Homilist. After Mass Bishop Boyce will make a significant announcement for the Diocese,” the email read.
Live streaming is available at www.steunanscathedral.ie
Bishop Boyce will continue in his role for another few months yet though until after the new incumbent’s ordination.
The names of a number of priests from Donegal and further afield have been touted as possible successor’s to Bishop Philip Boyce ever since the Donegal News first broke the story on Wednesday morning.
They include three Donegal born priests, Monsignor Kevin Gillespie who is a Papal Master of Ceremonies for Pope Francis, Rev Joseph Briody, a member of the teaching staff of St John’s Seminary, Boston and Fr Niall Coll from St Johnston, a leading priest-theologian who lectures at St Mary’s University College in Belfast.
Other names in the public domain have included Fr Francis Bradley, PP Buncrana and Fr Eugene Sweeney, Armagh, but sources close to both men have ruled them out of contention.
“As far as I’m aware it’s none of the people whose names are out there. You could well be surprised,” the source said.
A native of Downings, Bishop Philip Boyce, had previously been based at the Carmelite College in Rome and was ordained Bishop of Raphoe in October 1995.
He is one of only four men who have resided in the Bishop’s Palace over the past ninety five years. He succeeded Bishop Seamus Hegarty (1982-’94), Bishop Anthony McFeely (1965-’82) and Bishop William MacNeely (1923-’63).
In choosing a new bishop, the Pope generally chooses from a list of three candidates – a terna – which is forwarded to Rome by the nuncio. However, the Pontiff is free to appoint a candidate not on the list.
Clonfert has been awaiting the appointment of a new bishop since 2013 when John Kirby reached the mandatory retirement age of 75. In 2014, John Buckey in Cork & Ross turned 75 making the selection of a new bishop necessary.
Likewise, in Raphoe, Philip Boyce turned 75 in January ‘15. Later that same year Michael Smith in Meath reached the mandatory retirement age.
In July 2016, both Martin Drennan in Galway and Seamus Freeman in Ossory announced that they were stepping down due to ill health.
Just three months later, Liam MacDaid in Clogher retired early for the same reason.
Nine of the current 19 serving diocesan bishops in Ireland were chosen by Pope Francis, five by Pope Benedict and the remaining five by St John Paul II.
When the current vacancies have been filled, Pope Francis will have appointed 16 of the 26 diocesan bishops.
It is somewhat fitting that the announcement is being made on the feast day of St Colmcille who along with St Patrick and St Brigit is one of the three patron saints of Ireland.