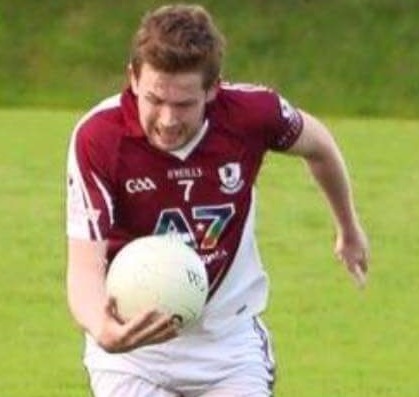 If you were throwing a party and you could invite anyone in the world, dead or alive, who would you ask around? Conor McGregor and Ronaldo – they would complement each other well.

Where do you like to go out to celebrate after a big victory? Arena 7 and up the town after

What’s the worst pitch you’ve ever played on? Na Rossa isn’t the best, but there’s a few bad pitches around.

Any odd items in your kit bag? Always have a set of rosary beads but that’s it.

Who’s the biggest joker in the team you play for? James Carr’s always messing about when he bothers to turn up.

Which team mate has the best looking other half? I’d like to think my other half would be up there.

Who is the worst/best trainer? Darren Hunter would probably be the best. Shane Gildea never shows his face since he’s gotten with the missus.

Who spends most time in front of the mirror in the dressing room? Shane Graham always has to be looking the part.

Who’s the best/worst person to sit beside on the team bus? Aidan Hanley would be the worst, he never stops talking.

Toughest opponent you have faced? I’ve marked some good players, but Ethan O Donnell would be up there.

Best or worst quote you’ve heard, either from a manager, player, opponent? ‘Whoever scores the most today boys will win’ – not the most inspirational quote.

Best ever performance? Against Moville in 2014 when we won promotion.

One to forget? Naomh Brid at home last year, couldn’t catch a thing.

Sporting ambition? Win a few championships with this group and realise our potential.

When you were playing in the back garden, who did you pretend to be? Always watched Colm Copper but could never do anything as gracefully as him.

If you were in charge of transfers, who’d be in and who’d be out of the team? We’ve a good settled panel at the minute but you’d never turn away a player like Diarmuid Connolly.