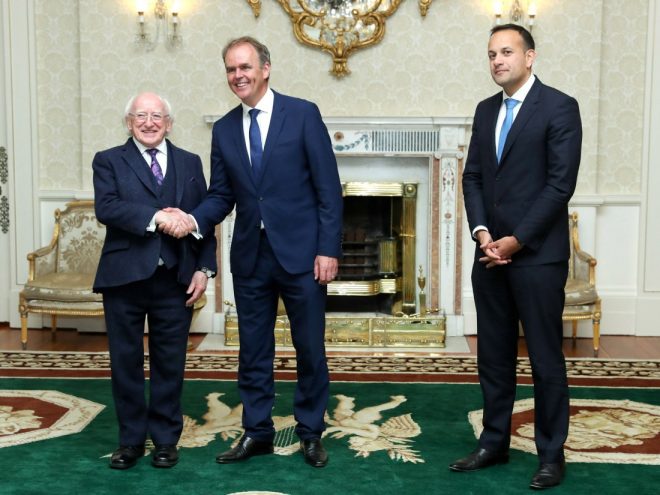 Minister Joe McHugh at Aras an Uachtarain, as he is announced as Government Chief Whip and Minister for Gaeltacht Affairs and the Islands with President Michael D Higgins.

THE new Government Chief Whip Joe McHugh was looking forward to getting home to his wife and three young children in Carrigart late last night (Thursday).
It brings an end to what has been a whirlwind 24 hours after Leo Varadkar appointed him to take over from Regina Doherty, who will now head up the Department of Social Protection, as Chief Whip – and a position at the Cabinet table.
Wednesday was a long day in Leinster House for the Fine Gael Deputy who had to wait until late in the evening before receiving the good news.
“I got the call at 6.55pm yesterday evening (Wednesday) and considering we had been due back in the Dáil at 6.30pm I had nearly given up the ghost,” he said.
Ten minutes later he was in the Taoiseach’s office where the good news was relayed.
Speaking to the Donegal News from Dublin yesterday, Minister McHugh said that he was delighted with the appointment.
“I was pleasantly surprised. I have worked hard for a long time now but I also realised that Leo was very limited in what he could do as he had promised a lot of Ministers that they would remain in Cabinet for supporting him,” Deputy McHugh said.
His new role in Government will see him as Chief Whip and Minister for the Gaeltacht in the new Leo Varadkar-led Government.
He had been Minister of State for the Diaspora and International Development, a position he had been appointed to last May by then Taoiseach Enda Kenny.
“I brought Leo to Donegal two weeks before the election was called and I was proactive throughout his campaign while the members in Donegal also gave him their full support,” he said.
“Donegal, as always, remains top priority with me and I’ll continue to do my level best to ensure that we get our fair share. This new role will see me work closely with the new Taoiseach on a weekly basis while I’ll be sitting beside him at the Cabinet table.”
“All our efforts will now focus on the budget and areas that need funding and I’ll be in a stronger position than ever to deliver,” Minister McHugh said.
While Minister McHugh will sit at the cabinet table he doesn’t have a vote.
“We operate through consensus politics which means that a vote is rarely needed but I’ll still have a voice at the top table,” he said.
It’s the start of a busy period for Minister McHugh and his Fine Gael colleagues.
“Like most Donegal people I’m not afraid of work. I’m up for the challenge and I won’t shirk from my responsibilities,” he added.
Was he taken from the Dáil to the Aras by limousine on Wednesday evening?
“Not at all. We all piled into a bus and headed out to the park. On a more serious note though it was great to meet the President when all our names were read into the records at the ceremony.
“I would like to acknowledge all the support I’ve received from people in Donegal and the number of good will messages I received overnight and this morning. I’m overwhelmed by people’s support,” he said.
“I am a strong supporter of Leo Varadkar and I do believe he will bring great change for the better to our country and I am looking forward to being a part of establishing that Republic of Opportunities, and for me, a Donegal of Opportunities where everyone has a chance to realise their dreams regardless of their background.
“There is a great deal still be done in this country and in Donegal and that work continues,” Minister McHugh said.
The last Cabinet Minister in a Fine Gael Government was Patrick ‘Pa’ O’Donnell who was Minister for Local Government from 1954 to 1957
Joe, who will be 46 next month, became a member of Donegal County Council on June 11, 1999 in the old Milford Electoral Area.
He ran for Seanad in 2002 on the Administrative Panel and was elected, taking his seat in July that year.
In 2007 Joe topped the poll in the old Donegal North East constituency and was re-elected to his seat in 2011 to the same constituency. He was appointed chair of the Good Friday Agreement Implementation Committee.
He was later appointed the Co-Chair of the British-Irish Parliamentary Party in 2012.
In the summer of 2014 Taoiseach Enda Kenny appointed Joe Minister for the Gaeltacht and Natural Resources. Joe went on the learn the language and is now a fluent speaker.
Niall Comer, President of Conradh na Gaeilge welcomed the appointment of Joe McHugh as Government Chief Whip with responsibility for the Gaeltacht.
“He won’t have a vote as Chief Whip, and Conradh na Gaeilge is still calling for a senior minister with a vote at the cabinet table, but his appointment will ensure that the Irish language and Gaeltacht have a voice at the Cabinet table again.