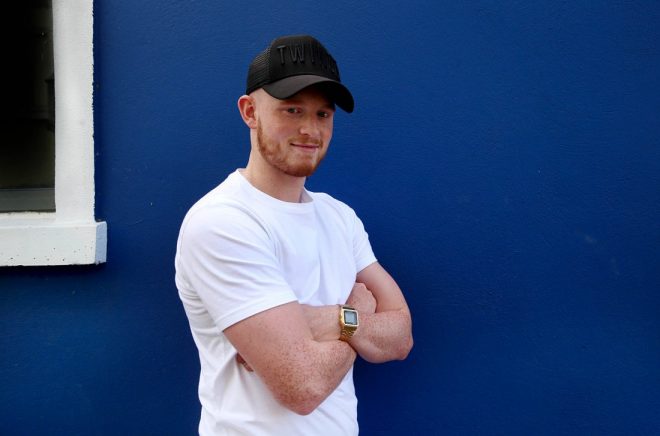 IT’S a beautiful Tuesday evening and Dale Gorman has just set off on a training run around Leckview Park.
The surroundings are familiar as it’s home to Letterkenny Rovers, the club with whom he made his senior debut as a 15-year-old.
A professional football with League Two side Stevenage, Dale is keeping himself in shape ahead of pre-season training which starts on Monday next.
Two days later, June 28, he will celebrate his 21st birthday with more lung bursting runs, but the sacrifices do not bother the young Letterkenny man who is happy to make a living doing what he loves.
But while stories of players receiving hundreds of thousands of pounds per week in England are becoming more regular, Gorman insists he could not be further from the glamour associated with the top levels of the game.
“I’m lucky in one sense because I’ve learned from an early age what it means to be a professional footballer. Winning and losing at this level can be the difference in whether or not some lads can afford to pay their mortgages. They’ve got wives and kids…
“You make enough money to live but I’m not going to be a millionaire any time soon,” he said.
As a young boy, Gorman had dreams of playing football professionally and becoming an international. Now he’s doing both.
Earlier this month he helped Northern Ireland U21s to a crucial 2-1 win against Estonia in their opening Euro 2019 qualifier. It was his sixth outing for Ian Baraclough’s team.
“That’s the first game we’ve won in twenty odd outings. Next up is a double header against Albania at home and Slovakia away, while Spain and Iceland are also in our group. I love playing international football. I never got a chance with the Republic when I was younger and they never came calling,” he explained.
Two years have passed since Gorman made his first-team debut with The Boro and he’s gone on to amass almost fifty appearances since.
During that first full season, Dale was on the fringes of the first team and most of his fourteen appearances came from the bench, while he played 34 times last season, scoring one goal.
Early last year he signed an ‘improved’ deal to keep him at the League Two side until 2019.
“The contract does give you a bit of security alright. I’ve another full season with Stevenage, maybe two, but I need to kick on.
“Next season, I want to improve my goal tally and get my name out there as an established League Two player and try and improve on that. I want to play at the highest level. I’m ambitious,” he said.
While Republic of Ireland captain Seamus Coleman was playing regular first team football with Premier League club Everton before his injury last season, the Killybegs man is the exception rather than the rule when it comes to young Irish lads forging a career for themselves cross channel.
“It doesn’t just happen. It’s a tough industry and a tough league to come out of. You have to have the right mental attitude to play in it and work hard,” Gorman said.
Steering clear of injury, and luck, are two vital components required to succeed in the cut-throat world that is professional football.
“It’s all about luck – the right person watching you play at the right time – and injuries,” he admitted.
A stress fracture in his lower back put Dale out of football for 14 weeks two years ago but he enjoyed a much better campaign last time out.
Plying his trade wide on the right as part of a four-man midfield playing a 4-4-2 system, Dale enjoyed a good season as Stevenage finished tenth.
“I’m used more in an attacking role with Northern Ireland whereas Stevenage see me more as a holding midfielder. In truth, I’m probably somewhere in between the two but as long as I’m playing I don’t really mind,” he smiled.
Stevenage FC have been drawn away to Millwall in Round One of the Carabao Cup. The game will be Dale’s first at The Den.
Pre-season games at home to Norwich and Charlton will also give the Letterkenny man the opportunity to pit his wits against players from higher divisions.
Last year he lined out against Stoke City in the League Cup, rubbing shoulders with the likes of Joe Allen, Glenn Whelan and Charlie Adam, while Lifford’s Shay Given played on goal.
“That was a nice experience. It’s where you want to be playing,” he said.
Another Donegal goalkeeper Conrad Logan from Ramelton will also be playing his football in League Two next season with Mansfield Town.
“It’s always nice to score against a Ramelton man,” he laughed.
Boro play The Stags at Mansfield’s Field Mill on November 18 with the return match at the Lamex on March 3.
Before then though Dale will be doing his level best to impress manager Darren Sarll and secure a place in the starting X1. They season opens with a home game against Newport County on August 5.
“The start of the new season is always very important. You have to go back as fit, if not fitter, than when you left. The manager has already forgotten last season and you have to impress him all over again. I’m looking forward to getting back at it,” he said.
With that, he continues with his laps of Leckview. His focus is already on the new season and cementing a place in the first team.