Nine-month old Oisín Boyle from Glenties, is the first child in Donegal to use the brand new BUMBLEance service in the North West. Oisín, who suffers from severe seizures following a brain injury, was picked up at 5am on Monday, driven to his hospital appointment at Our Lady’s children’s Hospital, Crumlin, and returned home later that day, at no cost to his family.

Sinead Boyle, Oisín’s mother, said she was ‘never so relieved in my life’ to have the support of BUMBLEance. After her original lift to Dublin was cancelled, Sinead was left feeling stressed trying to organise another way to Oisín’s hospital appointment.
“After speaking to a friend who fundraises for BUMBLEance, I messaged their Facebook page on Saturday morning at 10am. As it was the bank holiday weekend, I didn’t expect to hear back from anyone so soon. I was so shocked when Tony messaged me back within 10 minutes and said he would organise Oisín to get down to his appointment. It was like a tonne of bricks had been lifted from my shoulders.”

BUMBLEance is Ireland’s national and the world’s first interactive ambulance service designed for children. The service prides itself on being the ‘most modern children’s ambulance service on the planet with the capacity to operate the latest medical equipment and inter hospital communications systems.’
The state of the art Mercedes Benz vehicle has everything to keep children entertained, including a TV, PlayStation games console, iPad Mini and NUBI systems. With wifi on board, children can watch their favourite programs or films via live streaming from the internet. 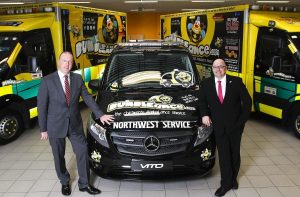 “The ambulance was beautiful on the inside, it really was a great service. It was nice and comfortable, I could not fault it at all.” Although there was plenty of things on the BUMBLEance to keep Oisín entertained, Sinead told us he slept the whole way down.

Breda Ward, a local committee member in Donegal, told the Donegal News how happy she is with the new service in the North West, “I’m delighted to see BUMBLEance getting publicity, it’s such a lifeline to us in Donegal and makes hospital journeys to Dublin a much more pleasant experience for sick children and their parents. My little niece, Eva, uses the service and we are most grateful for it.”

Tony Heffernan, the founder of the service, said, “ I am thrilled that the Northwest & Donegal is getting the first of several new regional based BUMBLEance services. The isolation of living in Donegal and other counties of the Northwest and the stress and challenges of parents and sick children who must travel to Dublin to access services will be greatly reduced by the BUMBLEance experience” Mr Heffernan added that the charity will be operating the vehicle itself and will be initially rolling out a 40 to 60 hours a week service from May 2017. In addition the charity will be creating two new jobs in the Northwest and has already employed its first new team member, Aiden Thompson from Donegal.

Tony concluded, “We are not state funded at all, and we rely heavily on fund raising. We have to fund raise money for the vehicles, for the fuel and for all the staff. We are really hoping the people and the companies around Donegal get behind us. ”
For more information on the services BUMBLEance offers, or how you can support the organisation, visit www.bumbleance.com.