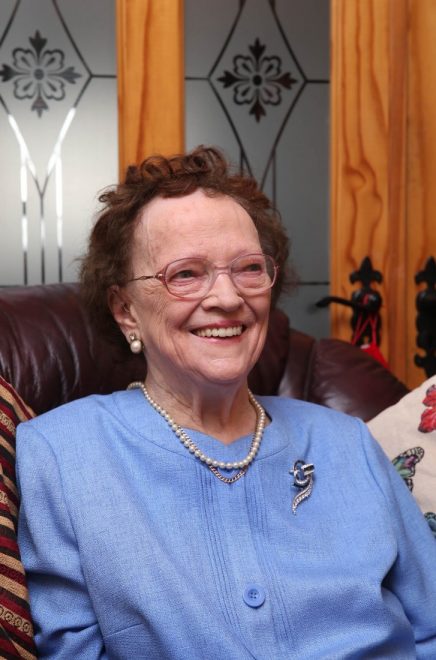 A crossword-loving great-grandmother is living proof that there’s no age limit to embracing the latest technology and its tools.
Mrs Eileen Doherty, 99 Ard O’Donnell, Letterkenny is one of the Cathedral town’s oldest citizens. Last week she celebrated her 95th birthday.
Her mantle-piece was still adorned with cards when the ‘Donegal News’ visited this week but it’s the gift of an Apple Ipad that has really captured her imagination in the days since her birthday on May 16.
The pensioner remains in regular contact with her friends and family through her smartphone while she keeps up to date with her grandchildren on Facebook.
Eileen, who first joined the Internet age via a lap-top computer, said Google is really handy to help identify some of the more difficult clues found in the many cryptic crosswords she tackles on a weekly basis.
Born in Paisley, Scotland, Eileen has seen many changes over her lifetime but she feels that it’s a great time to be young.
“At the end of the day you are only bounded by your own imagination. It’s a great time to be young,” she said.
The second eldest in a family of eight, Eileen’s parents Jim and Mary Woods operated a coal business in Paisley.
“My father had five coal lorries on the road,” she recalled.
“We came to Donegal at the start of the Second World War. My older brother Patrick, who was coming eighteen, was due to be conscripted but my father said ‘no’ and we came back to Ireland.
“He bought a farm – Ballymonaster House, outside Raphoe, which was near where my father was born. I was seventeen and had just finished school. I got a job as a clerical officer with Donegal County Council in Lifford and I used to cycle over and back to work,” she said.
Fr Tommy Doherty (later Archdeacon Doherty P.P., Donegal Man of the Year, 1985) was the curate in Convoy around the same time and he used to run a cinema in the village. His brother, Kevin, was a rates collector with the Council. He would become Eileen’s husband.
“I met Kevin at a cinema show one night,” she smiled.
The couple married in 1947 and later that same year moved into a new house in Ard O’Donnell, Letterkenny. Seventy years later it is still Eileen’s home.
“Kevin used to work in the Grill (Golden Grill) at night. When he came home one night I said to him ‘Is that you?’ and he asked me who was I expecting,” she laughed.
The couple had six children Anne Keogh, Elaine, Gemma O’Neill, Brian, Declan and Tommy (Dundalk).
“I’m still trying to get used to the iPad. I’m a bit of a crossword addict and like doing the cryptic crosswords in the Star, Sunday World, RTE Guide and Sunday Mail.
“If there was housework to be done and I hadn’t finished the crossword I would have to do the crossword first. I’ve often got up in the middle of the night to finish a crossword puzzle off if I couldn’t get it finished before going to bed,” she said.
Are crossword puzzles getting easier and does she often come across the same clue twice?
“No and no,” she smiled.
Doing crosswords has also proven to be quite profitable down through the years.
“One year I won a few hundred pounds from the RTE Guide. I put the names of my nieces, nephews, grand-children and great grand children down whenever I submit a crossword and when the cheque comes out I give it to whoever’s name is on the cheque,” she said.
“The iPad helps me out the odd time with a clue – thanks to Google. It also allows me to keep an eye on the younger ones. I know what they’re at and I can give them good advice,” she said.
“I tell them to be themselves and behave,” she added.
Unfortunately, many of Eileen’s neighbours have passed away over the years.
“Martha Duffy – across the road – she’s a gem. Also Tommy Francis (her late husband’s nephew) and Caitríona Woods (her niece) regularly call in to see me while my family are indispensable,” she said.
What’s her secret to a long, healthy life?
“No smoking, no drinking and early to bed,” she said.
When she’s not doing crosswords, Eileen enjoys watching the soaps although she feels the story-lines are ‘a bit rough’ at present.
With Skype, e-mail and social media apps like Instagram becoming vital tools to keep the elderly connected, Eileen is looking forward to catching up with her younger, tech-savvy peers on her iPad over the coming weeks and months.
“Did I tell you what I want put on my headstone when I die? Here lies Eileen, 6 down and 3 across!”
With that I make my way to the door, smiling from ear to ear, having spent a wonderful thirty minutes in the company of one of Ireland’s most tech savvy pensioners.