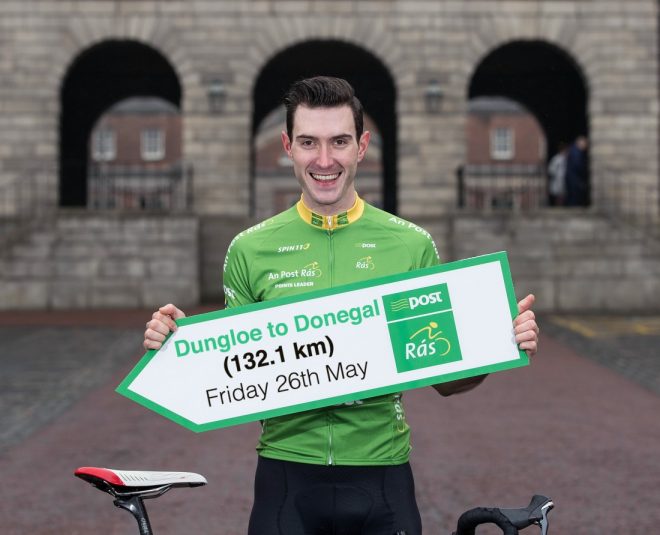 WITH less than two weeks to go until the 65th edition of An Post Rás gets underway, Donegal is gearing up for five action packed stages of Ireland’s only UCI (Union Cycliste Internationale) ranked cycling race.
The very best international talent from around the world will descend on Ireland for eight spectacular days of racing pitting themselves against the country’s top domestic riders in the hope of making their name amongst the cycling greats.
Setting off on Sunday 21st May this year’s edition of the race will see the peloton travelling west from Dublin and then north through Donegal’s Wild Atlantic Way before returning south east for the customary finale in the seaside town of Skerries.
Donegal will make up nearly 500 kilometres of the eight day challenge featuring no less than four stage finishes in the seaside town of Bundoran, Buncrana, Dungloe and Donegal town. The county is certain to play a crucial part in determining the eventual winner with the peloton facing two of the most difficult ascents in the country – Mamore Gap and Glengesh Pass.
Over the course of five stages in as many days, the riders will face undulating roads and intense hikes, ensuring it will be a real test of stamina and strong legs. Adding to the excitement, An Post Primes will be found in Dunfanagy, Flacarragh and Dunkineely.
Calling on the Donegal locals to support the race, An Post Rás Race Director, Tony Campbell believes that stage four to stage seven will be ones to savour:
“Donegal is playing an enormous part in this year’s edition of the An Post Rás. To have the stunning Donegal mountains as our backdrop will make the event one to remember. The locals also have one of their own, Ronan McLaughlin, to cheer on. He was devastatingly close to a famous stage win in Bundoran in 2012 and he is gunning to put that right this year.
We have talent from all around the globe; Australia, America, Belgium, France, Netherlands, Denmark, Britain and of course the Irish national, An Post Sean Kelly and domestic teams. The opening stage winner of this year’s Giro, Lukas Postlberger, won the Rás two years ago so it’s a testament to how strong the field is. I would really encourage as many as possible to come out and support all the riders as the atmosphere is sure to be electric.”
Clocking in at just under 1,200 kilometres, the An Post Rás will run from May 21st to 28th. As always, the race will place a heavy emphasis on national, regional and top level, locally sponsored amateur cycling teams.