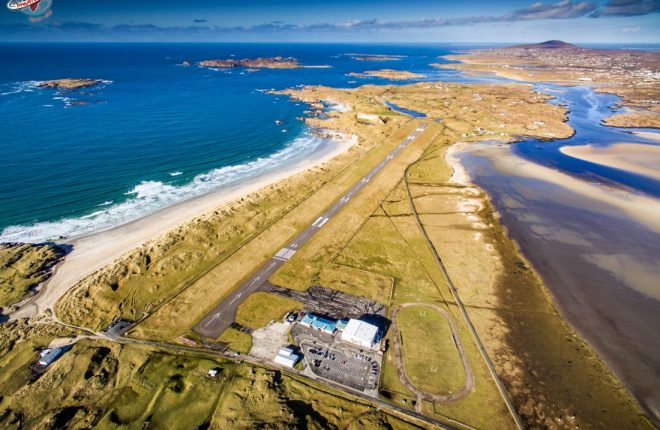 The stunning view as you drop down on to the Wild Atlantic Way at Donegal Airport.

DONEGAL Airport is flying high after beating off competition from New Zealand, America and France to be named the second most scenic airport on the planet.

It asks passengers for their views on the most scenic landing strips in the world.

Last year Donegal clinched the number seven spot on the top ten list. But this year it has hurtled up the rankings to number two, ahead of the Orlando Melbourne Airport in the USA, Billy Bishop Toronto City Airport City, Canada and France’s Nice Cote D’Azur Airport.

Holding Donegal off the top spot is the stunning Saba (Juancho E Yrausquin) Airport in the Caribbean.

Summing up what makes Donegal Airport one of the most beautiful places on earth, PrivateFly judge Adam Twidell said, “I have landed at Donegal many times and the rugged coastline of Ireland’s North West coast is even more awe-inspiring from the air, with the backdrop of Mount Errigal adding to the timeless appeal.”

Pauline Sweeney is Marketing Manager at Donegal Airport. She said it was a fantastic boost for the airport and the 30 staff who work there.

“It’s wonderful and we are all delighted,” Ms Sweeney said.

“From coming 7th last year, we hoped we would move up but we didn’t expect second place and we couldn’t have asked for a better endorsement for the airport.”

There are currently 11 airports across the USA and Canada that the public can book direct to and from Donegal via Dublin and following last year’s top ten placing, the number of tourists from America has increased significantly.

Pauline Sweeney revealed that in the wake of last year’s success visitor numbers increased by 21 per-cent. This year already the airport has welcomed 15.5 per-cent more passengers than on the same period in 2016.

“For anyone flying in, to have this as their first glimpse of Donegal really is something special,” she said.

Donegal has also become an increasingly attractive location for the private air industry with aircraft from as far afield as Florida docking in Carrickfinn of late. Pauline Sweeney said it was an aspect they were hoping to grow over the coming months and years.

“We have seen an increase in private aircraft and recently we have had planes coming in from places like France, Germany and America and that is something we hope to grow.

“The management and staff are all delighted with this award and it is great exposure for us as an airport,” Ms Sweeney added.