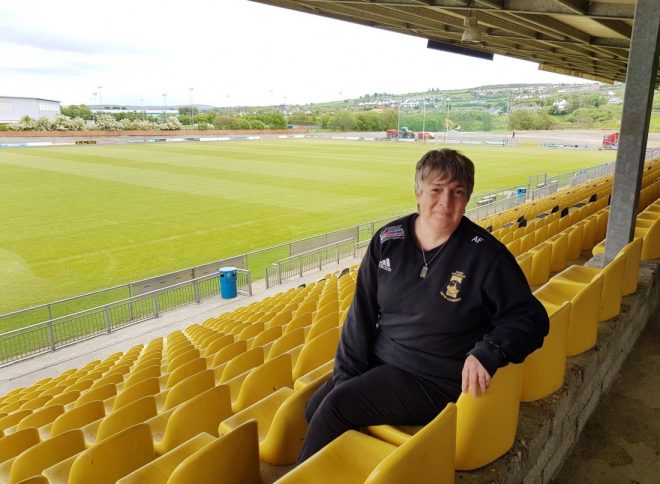 SIGNING up to give hours of your free time for no financial gain is unlikely to get many people queuing up to volunteer, but for Anne Forde it’s all about the craic and camaraderie.
The Letterkenny mother of four will be one of twenty plus volunteers working for the Donegal GAA County Board at Sunday’s Ulster Senior Football Championship quarter-final meeting between Donegal and Antrim.
There’s just one caveat: Anne’s gig doesn’t come with a view of the game.
“I haven’t seen the first half of a Donegal home game for about seven years or so now. I would normally record the game and watch it when I get home but Sunday’s game isn’t on television,” she sighed.
A familiar face on the gate of her home town club St Eunan’s, it’s closer to twenty years since she’s watched a game live at O’Donnell Park as Anne operates the ticket desk until half-time in the senior game before hopping behind the counter of the tea shop to help serve customers.
The daughter of the late Terry and Mary Russell, Convent Road, Anne lives in the family home with her husband Michael, daughter Terri (20), sons Niall (18) and twins Russell and Gavin (15).
Anne played camogie during her days as a student in Loreto, Letterkenny while her husband Michael, a native of Meath, is a former hurler. The twins are on the County Hurling Development squad.
Indeed, one of her proudest sporting moments was when all three sons were part of the Scoil Cholmcille team that won the first ever Primary Schools Hurling title a number of years ago.
“Watching St Eunan’s winning any Championship is good while I was also delighted when Donegal won the All-Ireland in 2012 but seeing the three boys on that team probably trumped the lot,” she said.
Anne first got involved in volunteering thanks to the persuasive powers of another St Eunan’s stalwart, Frankie Doherty.
“I’ve been a life-long St Eunan’s supporter and have been involved in the committee and things for the last fifteen years or so. I was always about the Park whenever there was a match on so one day Frankie gave me a job,” she said.
That ‘job’ now sees Anne at the ticket gate of most underage Northern Board finals, all St Eunan’s club games as well as Donegal games – both hurling and football.
On Sunday, Anne and her fellow volunteers are expected to arrive at MacCumhaill Park by 12.30pm. The Minor game throws-in at 2pm followed by the Senior game a 4pm.
“You’ll find me in a caravan outside the ground selling tickets. We won’t shut up shop until half-time in the senior game so I might get to see some of the second half if I’m lucky,” he said.
As the season progresses through the summer, Anne hopes that she’ll get the opportunity to watch a bit more football.
“Once they (Donegal) move out of the county to play games I can go along and watch them in peace,” she laughed.
“Here’s hoping it’s a good year for both Donegal and St Eunan’s,” she added.
Paddy Tinney is Assistant Treasurer with the County Board.
“We’re very lucky to have volunteers like Anne. Their efforts can make a real difference,” he said.