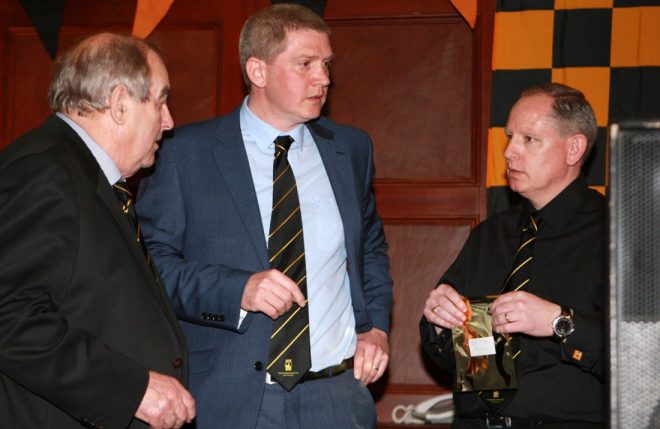 THE St Eunan’s GAA Club Private Members house draw has been hailed as a resounding success.
“It went well. We raised what was needed with a little cream on top,” draw Co-ordinator Ciaran Haran said.
Speaking to the Donegal News yesterday, Thursday, Mr Haran admitted that much of the past month or two had passed in a blur.
“We set out our stall in early December to sell between 3,500 and 4,000 tickets and we managed to do that will a little bit of room to spare. That extra money will help to pay for other improvements around the ground like the new tar-mac in the car park,” Mr Haran said.
“The main purpose of the draw though was to raise enough money to allow us to develop a new state of the art flood-lit Astroturf pitch behind the river goal at O’Donnell Park a a cost of approximately €200,000,” he added.
The club was awarded an €80,000 grant by the Department of Sport towards the cost of the project with the balance being provided by the club.
This was the sixth St Eunan’s house draw since the early 2000s and Mr Haran drew on past experiences.
“Brendan McGlynn created the successful template in how to organise a house draw and I stuck closely to that model while the assistance of on-line technology made it a little less labour intensive this time around,” he said.
Understandably, he declined to ‘name names’ but did acknowledge the fact that Frankie Doherty and Martin McHugh – who sold the most tickets in each of the previous five draws – has been joined by Ollie Harvey in the ‘top sellers’ list this time around.
“It’s the first time that the winner has been from outside Letterkenny but he has close links with the town. He’s friendly with Brendan Kilcoyne, Donegal assistant manager, and is dad played football with Sligo. Ultimately, he’s hoping to live in Letterkenny. It really is a life-changing story,” he said.
The Letterkenny club received great support from fellow Gaels across the county, country and further afield.
“There’s great goodwill out there. We had tickets on sale in bars in Glenties – one of our biggest rivals on the field – and Ardara while we had winners from both Glenswilly and Termon.
“That said, all clubs will benefit from the new facilities and we’ll be able to host underage tournaments while we’ll also make it available to local schools – in both parishes,” he said.
Will be there another house draw next year?
“No. However, there seems to be an appetite out there for such draws so maybe we’ll re-visit it in three or four years time – once we’ve had time to get over this one,” he smiled.
The winner of the St Eunan’s GAA Club house is Justin Brett from Tubbercurry.
The Sligo man currently lives in London but he now hopes that his big win means that he can make the permanent move home. He has described the win as “life changing”.
Everyone who purchased a €100 ticket was in with a chance to win the keys to the new €155,000 three bedroom home at Rann Mór, Oldtown and there was a great crowd in the Mount Errigal Hotel on Sunday night for the draw.
Shortly after midnight Mr Brett’s name was drawn out of the drum by Clare O’Donnell, who won the house in the last St Eunan’s house draw in 2008. He purchased his ticket online through Brian McCormick Sports.