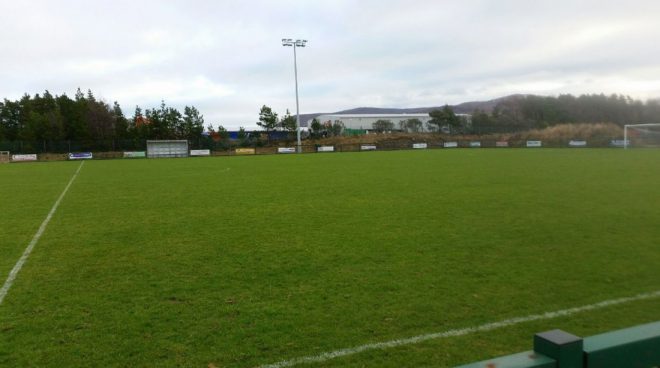 Údarás na Gaeltachta officials and members of prominent Donegal League soccer club in west Donegal are embroiled in battle of words this week.
It comes amid claims that Údarás have ‘walked away’ from a project adjacent to Gweedore Celtic’s An Screaban facility which the club believes will now cost them thousands to make safe.
“Since the removal of approximately 800 trees on a lane-way beside our pitch we have lost our shelter, our security, and with a large compactor we have a high noise level. We also have major issues with litter blowing onto our pitch. Single trees have been left on the ‘berm’ and are in major danger of falling and one has already done so.
“There are other issues which are a major concern to us, but our primary concern is for the safety and well-being of children and adults who come to play or watch activities on our grounds. We await correspondence from Údarás, but to date they have totally failed to engage with us,” Mr Johnny Coll, one of the trustees of Ceiltugh Ghaoth Dobhair explained.
Towards the end of last year Gweedore Celtic FC gave Údarás permission to access their facilities to enable works to be carried out as part of an investment to upgrade RAP factory in the nearby Business Park.
“We’ve had two meetings since (November and six weeks ago) during which verbal agreement was given that Údarás would remove a mound between the Estate and pitch and put in place a three metre wall and ball stop netting. Since then, however, work has ground to a half and, despite numerous attempts, the club have been unable to get into contact with Údarás,” he added.
However, when contacted this week Mr Páid Ó Neachtain pointed out that Údarás na Gaeltachta has a long collaborative relationship with sports clubs and voluntary committees throughout the country’s Gaeltacht areas, Ceiltigh Ghaoth Dobhair Soccer Club included.
“Some of the excellent facilities Ceiltigh Ghaoth Dobhair have developed are indeed located on a 10 acre piece of land procured from Údarás na Gaeltachta. In the recent past various developments have been proposed for Páirc Ghnó Ghaoth Dobhair (Gaoth Dobhair Business Park) to assist with the effective running of the park and to help various businesses to extend and expand in order to facilitate further creation of employment for the area’s community,” he said.
Although there were some discussions as regards the various development options available on the Business Park, including that portion which extends alongside Ceiltigh Ghaoth Dobhair facilities, Mr Ó Neachtain said that no agreement or decision was or could be made in this regard since works of this type would be subject to the permission of the planning authority.
“The planning permission Údarás na Gaeltachta received for various works on the Business Park included a condition which obliged Údarás na Gaeltachta to retain three metres width of the mound referred to by the club and therefore any proposals for its removal were excluded.
“It is the intention of Údarás na Gaeltachta to complete the works in total as per planning permission granted. Údarás na Gaeltachta had no involvement or input in the on-site arrangements between the contractor and Ceiltigh Ghaoth Dobhair regarding access or use of facilities. It is Údarás na Gaeltachta’s wish to continue to work hand in hand with communities and community and sports groups throughout the Gaeltacht to maintain vibrant Irish speaking communities,” he said.