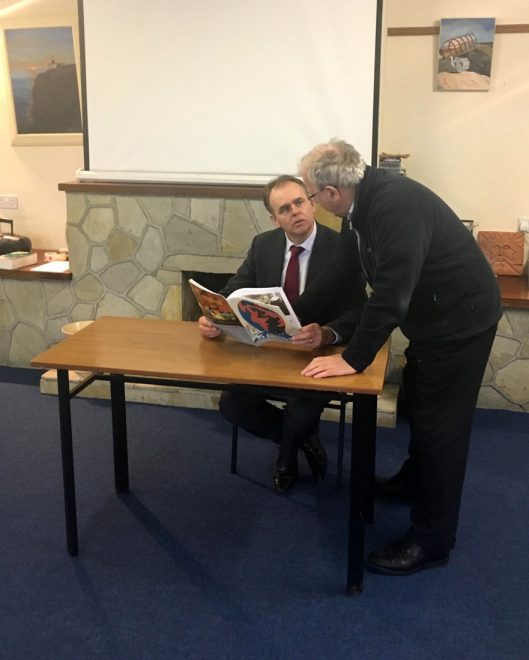 IN July 2014, Taoiseach Enda Kenny sparked uproar among the Irish speaking community at home and abroad when he appointed Joe McHugh as Minister of State with responsibility for Gaeltacht Affairs.

At the time of the surprise appointment, the Donegal TD admitted his Irish was ‘basic’, yet he was expected to be able to deal with and handle matters to do with the Irish language and Gaeltacht areas.

As a result, Mr Kenny directed McHugh to Oideas Gael, an Irish language and cultural centre in Glencolmcille, the birthplace of An Taoiseach’s late mother Eithne.

There, the struggling new Minister began what he called his ‘re-immersion in the language’.

Since then, however, Minister McHugh has defied his many critics and will return to Oideas Gael for a week in August, as a teacher.

Now Minister of State for the Diaspora and International Development, he paid tribute to the director of the centre, Mr Liam Ó Cuinneagáin, for giving him the opportunity to prove his worth.

“I was delighted when Liam told me there was no reason why I couldn’t teach the class,” he told the Donegal News this week.

“I am really looking forward to it; I am hopeful that there are people out there who were just like me and have been thinking about coming back to the language.”

While he has moved to a new ministry, Minister McHugh stressed that he always said he would “take Irish with me” and now speaks it every day in Donegal, and at every opportunity in the Dáil.

“The lovely thing now is that people who have a wee bit of Irish seem comfortable coming up to me to speak Irish, people who maybe only have a cupla focal,” he added.

“And it’s not just people in the Gaeltacht; people in every corner of the county will try to speak Irish to me. Oideas Gael have been so good to me on my journey through Irish and I am delighted that I can maybe give something back to them this summer – and of course continue to improve and learn our national language.”