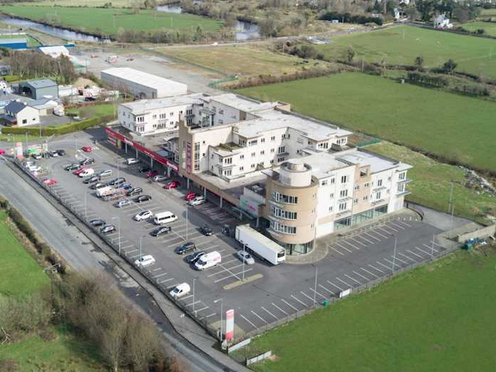 ELEVEN properties across Donegal sold for more than one and a half million when they went under the hammer at a latest online auction by Allsop.
Houses, shops and office and apartment blocks from Ballybofey to Greencastle were among 230 lots, valued at over €38m, that were sold off on Wednesday.
Forty seven apartments, made up of eight one bedroom, 38 two bedroom and one three bedroom units at Navenny Shopping Centre in Ballybofey made €571,000. They had initially been offered collectively for between €245,000 and €255,000.
Also in Ballybofey, fourteen retail Units at the Finn Valley Shopping Centre, which had a reserve of between €110,000 and €130,000, sold for 370,000.
A commercial property at Ardarvan Square in Buncrana, which, Allsop says, is currently let to an individual trading as Food For Thought, sold for €145,000 while an Industrial mixed use building at Bonagee, Letterkenny, made up of retail and office space over two floors, was sold for an undisclosed price prior to auction.
On the residential front several four-bedroom homes, all starting with reserves of less than €90,000, were sold.
A four bedroom semi-detached house at 68 Gleann Rua, Glencar sold for €74,000 while the house next door, 69 Gleann Rua, made €77,000.
In Buncrana, a detached four bedroom house at Cornmill Avenue realised €137,000 and a house at Leophin in Linsfort sold for €129,000
Elsewhere, parcels of land in Ballindrait and Greencastle, were also on the market. The 1.16 acre site at Ballindrait raised €21,000 while a 1.5 acre site in Greencastle sold for €36,000.
Meanwhile, the Kube Building in Letterkenny, a three storey office block, which is currently home to Donegal County Council, valued at between €410,000 and €460,000 on reserve, was withdrawn before auction while a third floor one bedroom apartment at 47 Westside Apartments, Lower Main Street, Letterkenny, remains available. It has a reserve range from €20,000 to €30,000.