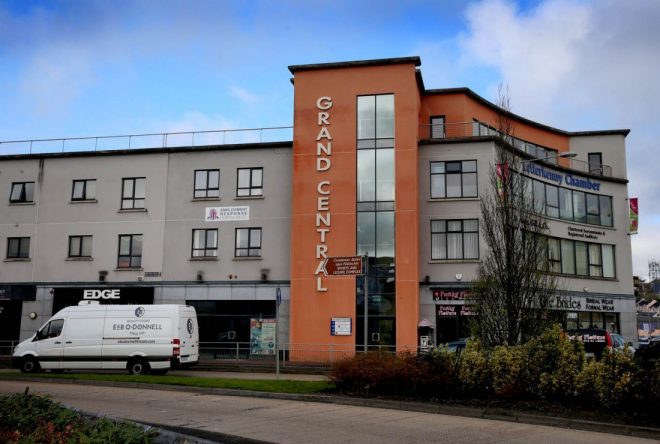 The Grand Central building in Letterkenny.

THE new ‘Pieta House’ suicide and self-harm crisis centre for Donegal will open its doors for the first time in Letterkenny on Monday, May 15, it has been confirmed.
The first Pieta House was founded in Lucan, County Dublin in 2006. With nine centres throughout Ireland, it provides a professional, one-to-one therapeutic service for those who are experiencing suicidal ideation or engaging in self-harm. The nearest one to Donegal is in Tuam, County Galway.
A spokesman for the ‘Action for Hope’ committee, which was only set up last year to raise awareness and funding for the project, told the Donegal News this week that staff have been recruited and work was ongoing getting the premises within the Grand Central building ready.
Mr Danny Devlin said that the new Pieta House would initially open from Monday to Friday and would focus on providing crisis and prevention counselling services as well as having a family bereavement service for people who have been bereaved by suicide.
“We’re working in close consultation with Pieta House. Staff have been recruited following interviews and the new Letterkenny office will be up and operational in the first two weeks in May,” Mr Devlin said.
The retired Garda also paid tribute to the people of Donegal for helping to make their plans a reality, having raised more than the €200,000 target in just nine months.
“Most of the monies raised will go to ensure that the service is sustained. It costs €800 for each person who goes through Pieta House and we’ve built up reserves to ensure that the service is sustainable into the future,” he said.
“Pieta House will be based in Grand Central – in the same building as the Letterkenny Chamber – and we’re looking forward to it opening,” he added.