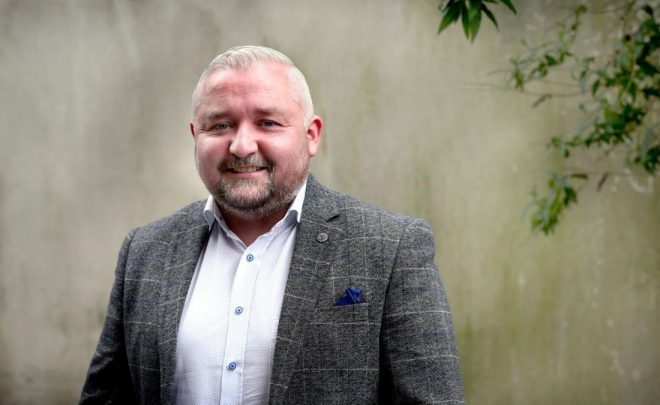 ON Thursday last, Ardara club-men Pat Shovelin and Harry Walsh met for a coffee in Letterkenny. Over the course of the next hour they spoke about football, work, life and much, much more including Pat’s ongoing battle with cancer..

WHEN Donegal lifted the U21 Ulster Championship earlier this month, team manager Declan Bonner dedicated the win to their goalkeeping coach Pat Shovelin who is battling cancer.
Shovelin (40) was back on the sideline last weekend at Breffni Park as the Tir Chonaill men lost out to Dublin in the All-Ireland semi-final.
A native of Ballykilduff outside Ardara, Pat is the most successful coach in Donegal history. The final success over Derry was his second Ulster U21 title to go with three Ulster senior titles and one All-Ireland (2012).
Speaking to the Donegal News on Thursday last, Pat thanked Declan and the U21 players for their support while he also paid tribute to his wife Chrissy, his young sons Ethan (4) and Tom (16 months), his mother Margaret, brothers Gavin and Michael, sister Susie and extended GAA family for their help in these tough times.
Pat will celebrate his 41st birthday next month but all his energy and focus is on a scan he has in Dublin a few days later.
“That scan will determine where I’m at. It will let the doctors know whether the chemotherapy has been working or not,” Pat said.
“If it has been working it’s a big step forward and, hopefully, surgery will be back on the table once more. If not then I’ll just have to go down that road and I’ll have to face that as well.
“Until I get those results I’ll keep fighting and battling on and I really appreciate all the messages of support and goodwill,” he said.
Manager of the Medical Records Department in Letterkenny University Hospital, Pat supervises a staff of 19.
“They’ve all been great and I would like to thank senior management for allowing me the necessary time off work,” he said.
“It’s a rare cancer – gland carcinoma – or bile duct cancer – which is usually seen in people aged 70 plus and here I am not even 41 yet – it’s tough to take,” he smiled.
The first sign that all was not well was a persistent pain down his left side.
“I had been jumping around the goal at training one night and it felt like a pulled muscle. I went home and told the wife and we both thought that I was just getting a wee bit too old for goal,” he laughed.
Unfortunately, it proved to be much more serious.
“Yeah. The pain persisted and I phoned Charlie (McManus, doctor to the U21 team). He’s married to a cousin of mine – Evelyn Ward who’s a GP from Glenties. He gave me a course of antibiotics as I had my gall bladder removed after the All Ireland final in 2014 and he thought it was something in relation to inflammation there,” he said.
That was before Christmas. The holiday period came and went as did the New Year but the pain refused to go away.
“I contacted Charlie again and wrote a letter to Dr Steele in the hospital. He examined me and ordered a CT Abdomen on me and unfortunately it showed up that I had cancer in the liver.
“They quickly sent me on to Mr Gerry McEntee in the Mater – the former Meath All-Ireland winner. He was quite positive the first day he met me. He said surgery was possibly on the table in relation to the liver before sending me for a PET scan in the Blackrock which showed that the cancer had gone outside the liver and into the abdomen and my lymph nodes. Surgery was no longer on the table and I was looking at chemotherapy treatment. I was transferred back to Letterkenny and to the care of Dr Karen Duffy, Oncologist. That’s where I’m at at the moment,” he said.
While he still looks healthy, Pat admits that these past few months have been “tough going” with a lot of side-effects.
“Fatigue is a big issue. I’m not able to do all the things that I’m used to. My energy levels have gone down and I’m not fit to play with the boys as much as I used to,” he said.
“Every day’s a struggle. I’ve gone from no medication to being on eight tablets a day while I have to drink three litres of water a day to keep my liver flushed out,” he added. 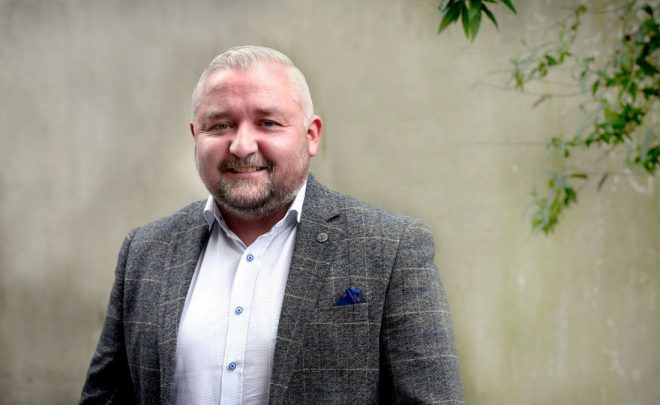 Pat continues to see the glass half-full and he’s staying positive.
“I’m fighting it as best I can and the football has been a great distraction. I’ve had lots of well-wishers from across the country and the GAA family have been very good to me as have my own family back at home.
“It’s tough on Ethan though. He’s coming five and he knows that daddy is sick but he doesn’t understand the extent of it,” he sighed.
Another man who’s been at Pat’s side from day one is Donegal All Ireland winning manager Jim McGuinness.
“The first appointment I had with Gerry (McEntee) was 7am on a Monday morning and I travelled to Dublin with my brother Gavin. As we were parking the car I got a call from Jim and I thought that he was wishing me well. He asked where I was and I told him. He said ‘hurry up’ as he was waiting in Gerry’s office.
“Listen. Everyone has been great and it’s keeping me going,” he said.
“It was very touching and a lovely tribute from Declan and the boys after the Ulster U21 final. My illness started around November time, not long after I had agreed to become part of Declan’s back-room team,” he explained.
“I’m putting my trust in God and the doctors. When I started out in November (with the U21s) I was on top of the world. I was able to finish my goalkeeping coaching badges to be a professional coach and, in time, I thought that Jim might give me a call again. I had been over with Celtic and met Steve Woods, their goalkeeping coach. I suppose I can still dream.” he said.
In conclusion, Pat urged young people – both male and female – to get regular check-ups with the doctor.
“If nothing else, this has taught me that you can’t be too careful. My bloods were perfect – they still are – and I was lucky to have been caught so early.
“I just hope that I’ve been caught in time and I would urge anyone reading this to go and see you doctor at least once a year. The worst thing that can happen is that they tell you you’re fit and well,” he said.
Shovelin worked with Jim McGuinness as goalkeeping coach to the 2012 All-Ireland winning side and the beaten finalists in 2014.
He was also part of McGuinness’ backroom team when Donegal won the Under 21 Championship title in 2010, and went on to reach the All-Ireland Final.
When McGuinness stepped up to senior manager the following season, his trusted lieutenant Shovelin joined him and became goalkeeping coach.
He worked alongside the Donegal netminders Paul Durcan and Michael Boyle, and they helped to end a 19-year wait for an Ulster title that summer. 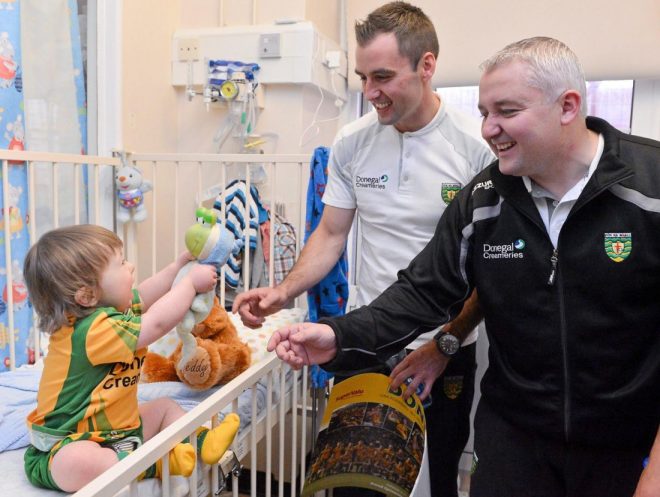