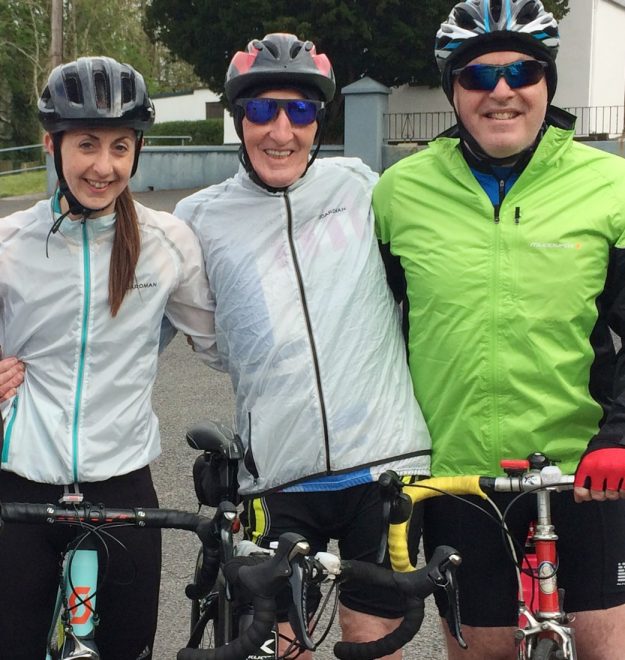 Hugh Tinney with his daughter Fionnuala and son Barry.

THE second staging of the Donegal Atlantic Way Ultra Race this summer is set to be a real family affair for retired Letterkenny businessman Hugh Tinney.
Mr Tinney (75), his son Barry, daughter Fionnuala Larkin and son-in-law David Larkin have entered the team race as part of the ultra cycle which follows 555km of the Wild Atlantic Way around Donegal.
On Sunday morning last Hugh took part in the Drumoghill National School annual fund-raising 55km cycle and he’s looking forward to clocking up many more miles ahead of the event which will take place over the weekend of June 23rd/24th.
“I’ve come a long way from the days when I used to cycle a heavy old Hercules single gear bike from my home in Ard Drummond outside Ramelton to work at the old McClean and McLaughlin garage in Letterkenny,” he laughed.
It was a time when the secondary roads weren’t even tarred and the journey took the best part of an hour.
“You had to be in at work for 8.30am which meant that I left home about half seven. It was important to get the speed up ahead of any hill you had to climb which wasn’t that easy given the weight of the bike,” he recalled.
Having taken delivery of a new 22-gear state of the art ‘Kuota’ carbon fibre bicycle last Christmas, he would be able to make a similar journey in double quick time today.
“I gave up cycling for a number of years and started to play golf but decided to get back on the bike again about five or six years ago when my daughter Suzanne and her husband Sammy (Bogan) were training for Gaelforce,” he said.
Mr Tinney entered the motor business straight from school, joining McClean and McLaughlin where he worked as a mechanic on the Volkswagen Beetle and some commercial vehicles for 14 years before setting up his own business adjacent to Ted Cox’s premises on Market Square.
From there he moved out to The Glebe where he operated a garage from his home before moving back into Letterkenny in the late 1980s where he took on the Mazda dealership. He’s retired sixteen years.
“I was cycling long before I retired. I remember taking part in an 1,100 mile cycle in Boston for Our Lady’s Hospital in Crumlin once. It was September time and the weather was that bad we didn’t even manage to finish the cycle. I had been wondering what sun factor to take with me and here we were on the first morning and it was bucketing down.” he said.
Retired Garda Mick Jennings, Patsy Doherty and Danny Murray were among his cycling friends down through the years and they used to take part in the annual Sligo to Letterkenny cycle.
“We used to go out once or twice a week. I remember we used to cycle to Omagh, turn round at the lights and cycle back home again. Mick (Jennings) was a hard goer so there wasn’t too much time for chatting along the way,” he smiled.
Last weekend’s 55km cycle took less than two hours to complete in what he described as being a ‘good spin’.
“I time myself on every run and always try to go a little quicker the next time. There’s no time wasted. I don’t stop off anywhere for a cup of tea or anything. I keep my head down,” he said.
Hugh will celebrate his 76th birthday in July but he’s no intention of slowing down any time soon.
“I’m healthy thank God. I live for today and, today, I’m still feeling good,” he said.
Hugh’s wife Patricia doesn’t cycle as she’s not too fond of traffic.
“She has a bike and can cycle and, to be honest, I don’t think we would get on too well together out on the bikes but I will take her for a wee spin to get her started,” he said.
Daughters Karen, who lives in London, and Suzanne who is expecting a baby this summer will be part of the Ultra cycle.
“It will just be me, Barry, Fionnuala and her husband David and maybe a few more. It’s something to look forward to,” he said.
The race head quarters will again be at the Mount Errigal Hotel in Letterkenny, where the competitors will depart for Inishowen, travelling anticlockwise towards Malin head and over Mamore Gap before returning to Letterkenny via Buncrana. The race will then follow the Wild Atlantic Way in a southerly direction taking in Knockalla, Fanad Head, Atlantic Drive, Hornhead, Carrickfin, Glengesh Pass, Sliabh League and Barnesmore Gap before finishing in Letterkenny. 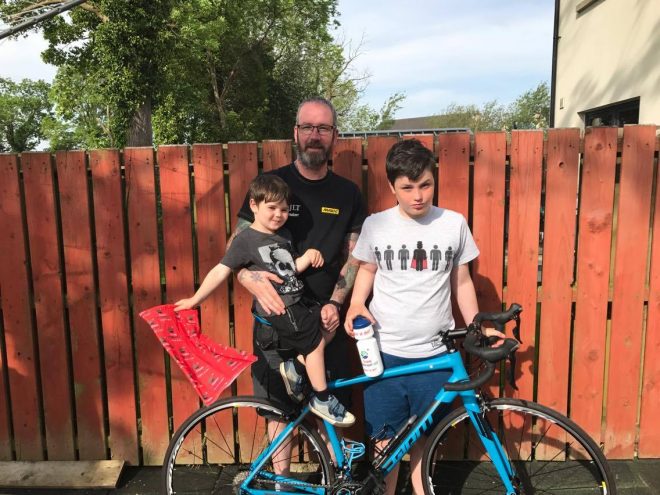 Marvin is now one of an eight person team currently in training and will take part in the Donegal...