WORLD champion endurance swimmer Paddy Bond, who defended his Irish Ice Swimming Association title in Armagh three weeks ago, won four gold medals at the Irish Life Saving Championships in Limerick last week.
Bond (37), who works as an electrician, is the January 2017 winner of the Donegal Sports Personality Award.
Speaking to the Donegal News this week, he admitted that he is still hoping for one more cold snap in the coming days to allow his participation in another ice swimming event before the season closes down until mid-October.
“It’s too warm at the moment,” he lamented.
Last week, Lough Salt was the only place in Donegal ‘cold enough’ for such a swim but as it’s used as a public water supply it’s strictly out of bounds.
Ice swimmers train rigorously in indoor pools to build endurance and carefully acclimate to cold water with progressively longer swims in rivers and lakes.
In competition, this involves swimming 1,000 metres in 2-3°C water conditions and minus air temperatures and having to make do with trunks, cap, earplugs and goggles – the only equipment allowed in competition.
Back in January Paddy travelled to Burghausen in Germany with his wife Catherine where they joined the other members of the Irish team who were taking part in the Championships.
This event, which is held every two years, is the Olympics for winter swimmers all over the world. This year’s event attracted over 1,000 competitors from more than 30 countries.
There are risks associated with swimming the 40 lengths required and therefore entry criteria is very strict.
Chairman of the Swilly Seals Swimming Club, Paddy was under the expert tuition of the Seals head coach Chris Hudy before moving to Gartan Lake where he had his dad, also Paddy, for company.
“I had been hoping to swim close to sixteen minutes in Germany but it took me 17:40 which left me disappointed as I got out of the water. The event is run in heats and I didn’t know how I got on until later in the day it emerged that I had actually won my age group. I was delighted,” he said.
What Paddy didn’t realise at the time was conditions had been far from ideal with air temperatures at minus 18 around the pool.
“It was like nothing I had ever experienced before. I was gasping for air throughout the whole race and I felt my whole chest compressing but now I know the reasons why,” he said.
“Before that race I was visualising the hot tub afterwards. It was my happy place and even when the water is freezing cold I still have my happy place. It’s a case of mind over matter,” he explained.
“I’ve been swimming in Gartan for years and people tell me it’s cold. I try and ignore those words and I just do what I have to do. I suppose it’s a wee bit different alright,” he smiled.
“Ten minutes before a race I go into a zone whereby I visualise a happy place which I focus on when I enter into the ice cold water,” he added.
Twice a week Paddy can be found at the Aura Leisure Centre from 5.30am coaching the young Swilly Seals and it’s a labour of love.
“I’m just trying to give a little bit back. Last weekend I won four gold’s at the national surf life-saving competition in Limerick and what made it extra special for me was that my son Joseph was also competing. Later in the year we’re off to Spain for the European Championships,” he said.
Work as an electrician keeps him busy while he also does some part-time work with Micad Security.
“I would like to thank Ivan Harvey (Micad), Swimming World (Where Caroline does a bit of work), Ursula (McPherson) out at Gartan for their help and also Chris Hudy who has been coaching me,” he said.
“Life is good. I defended my Irish Cold Water title three weeks ago – coming fourth overall – while I’ve the life-saving to keep me busy over the summer months before the water temperature drops low enough to allow us to compete again come October or November,” he said.
“They’ve a permanent pool in Camlough outside Newry and we’re trying to bring the World Championships here next year,” he added.
The youngest son of Paddy and Mary Bond, Paddy has an older brother Martin. Married to Catherine, the couple have four children Joseph, Caoimhe, Jack and Paddy. 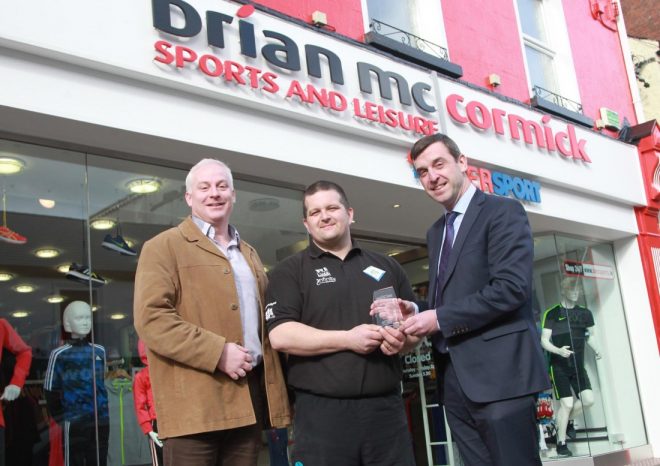