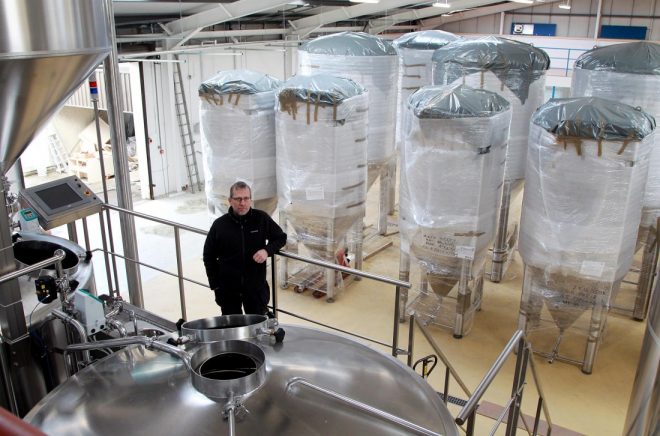 LETTERKENNY’S first brewery is set to open its taps in the coming weeks.
The Kinnegar Brewery, featuring seven craft brews, will be operational before the end of March at the former A&M Belting premises to the rear of Arena 7 at Ramelton Road.
Mr Rick Le Vert, owner and head brewer, said that, when fully operational, the new facility will be capable of producing more than three times the volume than at the company’s current brewing plant near Rathmullan.
Kinnegar Brewing was founded by Mr LeVert and Libby Carton in 2011, producing 40 litre test batches at a time. However, within two years, the firm relocated to Aughavannon where it produces up to 1,000 litres at a
time.
Today, their beers are now available in over 300 shops, restaurants, hotels and bars around Ireland. Annual production has increased from 100,000 litres to 400,000 and staff numbers have grown to include six full-time and three part-time positions. The company has also been the recipient of numerous awards in Ireland and America, and only last weekend winning two gold medals at the prestigious Dublin Craft Beer Cup.
On Wednesday, Mr Le Vert was busy overseeing delivery of equipment at the new Letterkenny plant.
“We’re investing €1 million which is a substantial sum,” he explained.
“At present, all our products are consumed in Ireland. We have relationships set up in France and Italy and they’re basically waiting on the products out there, but the problem today is that we’re unable to meet demand.
“We’re looking at the export market and we’re optimistic about the future,” he added.
The home brewing process started in a building to the rear of their home in Rathmullan and expansion plans were initially submitted for a new facility on the grounds of Rathmullan House.
“We got planning permission through from Donegal County Council but, unfortunately, we saw the subsequent appeal to An Bord Pleanála coming, so we were already looking at alternative locations.
“As a small business we couldn’t afford to wait possibly 18 to 24 months for the appeals process so we had to abandon that project (Rathmullan),” he explained.
Kinnegar Brewery produced 400,000 litres of beer in 2016 and the new facility has the capacity of producing three times that amount.
“We’ve become exceptionally good at producing a beer under a lot of pressure, but this (Letterkenny) is new and we’ll take things slow and steady for the next twelve months at least. It’s a new system which will take us some time to work around and get used to. This year, I don’t expect us to make much more than twenty per cent more beer and we’ll take it from there,” he added.
“We have a core range of seven craft brews while we produce a special every month which means that, in total, we probably brew twenty different beers. It’s what small breweries are all about. We’re not here to produce one beer all the time. That’s not what our customers want. Also, it’s a lot more fun for us,” he smiled.
Between ten and fifteen people will be employed at the new Letterkenny plant, but what about the company’s existing premises in Rathmullan?
“We will run the two breweries in parallel for a while, but at some point we’ll have to make a decision. If we need capital we’ll probably sell some of what we have. If we don’t need capital right away, we will have the slight luxury of having a little more time to think about things. We’ll have a better idea when Letterkenny is up and working,” he said.
“We’ll be brewing here within the next three weeks. All our focus is on getting the test brews right. As a small business, we’re taking on a risk by expanding so we’re being very cautious.
“It’s a very big move for us (Letterkenny) and also a big financial commitment, but our first job is to make sure that the quality of the product is at, or above, what we’re currently doing and I’m confident that we’ll reach that benchmark.”
Meanwhile, Kinnegar won two gold medals at the Dublin Craft Beer Cup. The competition is run annually in conjunction with the Alltech Craft Beers & Food Fair and allows craft brewers to showcase their brews to have them rated, tasted and analysed by an expert, international panel of judges.
Gold silver and bronze medals are awarded for merit. Of the 16 gold medals awarded, Kinnegar received two, a remarkable achievement for a brewery of its size.
These gold medals were awarded to Yannaroddy Porter, one of Kinnegar’s core range, and to Big Bunny, a New England-style India Pale Ale (IPA) made as part of Kinnegar’s “Special” range.
In addition, the brewery achieved a silver medal for Otway Pale Ale, first brewed in 2014 to honour Paul McGinley’s captaincy of the European Ryder Cup team and now a permanent feature of the core range. Rustbucket Rye Ale and Black Bucket, a Black Rye IPA, received bronze medals.
The 2017 Dublin Craft Beer Cup overall winner is Saison Witbier from Horizont brewery in Hungary.