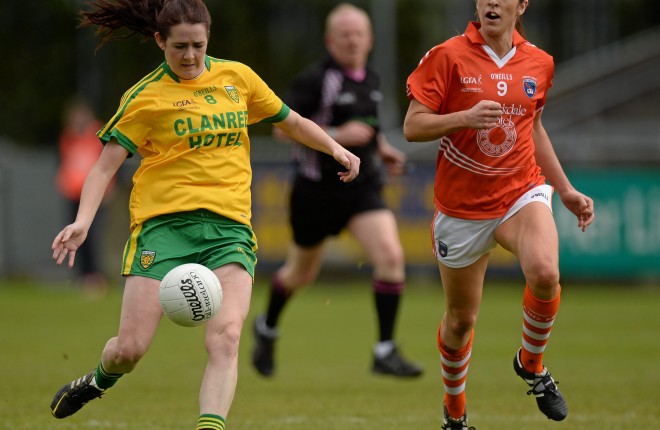 Katy Herron in action for Donegal

THE Donegal ladies are hoping that their good away form continues when they make the long trip to Kerry this weekend.

Michael Naughton’s team have made an unbeaten start to the year, and recorded a narrow win against Galway in Tuam a fortnight ago.

They worked hard over the weekend, and that should stand to them when they take to the field in Rathmore on Sunday at 1pm.

“We didn’t have a game but I wouldn’t say it was a break,” she quipped.

“We had a good weekend of training and then eased off after Sunday.

“It’s hard to get a lot of work done when you have games every week, so we made the most of last weekend, and we got all the girls regrouped.

“We normally train on Friday night but we’re taking that off this week, and going down early on Saturday morning.

“We’ll get down in good time and get a wee loosener. The game has been pulled forward on Sunday, so we won’t be too late getting back home.”

The Glenfin star has been very pleased with how things have gone so far for her team in 2017.

They were convincing winners against Armagh in their opener, and while they needed captain Geraldine McLaughlin to kick a late winner against Galway, they still claimed the spoils and sit on top of Division 1 after two rounds of the NFL.

“We have got off to a good start. I think we were kind of shocked with how good we played against Armagh.

“The Galway game was closer and it was touch and go to see if we would hold on. We nearly threw it away.

“We gave away a few easy scores and lost our concentration. We didn’t adapt very well when they started to get on top.

“We were lucky enough to win, but we got the three points and that’s all that matters. We’ll be hoping for the same again this week.”

After winning promotion from Division 2, the Donegal ladies feel they are operating at the level they deserve to be at. However, they’re not going to rest on their laurels at this stage.

“Everyone of the girls is pushing hard and there is a lot of competition for places.

“So far we have been able to compete with the teams and we would like to keep doing that, but we need all the girls to put in a big shift every week.

Reigning All-Ireland champions Cork have already been beaten in the league, and a win for Donegal this weekend would leave them well positioned for a place in the league semi-finals.

However, Herron isn’t even considering that at the moment, and all her focus is on ensuring that Donegal stay in the top flight.

“We’re not thinking much about that. All we’re looking to do is stay safe and get settled in the league.

“We’re not expecting too much. We know that there are a lot of quality teams in the league.

“We’re just taking it week by week, and hopefully keep on winning.

“If you look at the table now, every county is pretty much on the same amount of points.

“We’re just taking it game by game, and we won’t get too excited.

There have been a few changes to the Donegal set-up this year with ex-trainer Sean O’Kane moving on to take charge of Armagh, and he has been replaced by former Sean MacCumhaill’s manager Damian Devaney.

Adam Speer is also involved, and Herron has nothing but praise for the new regime.

“Damian has come in to do the training, and Adam Speer is doing the Strength and Conditioning, and they are working very well together so far.

“We started training early, and we have put in a big push to improve our fitness. I think that was an area we struggled later in the season last year.

“We’ve put in a lot of hard work so far and it has been paying off, but we need to sustain it now – it’s a long season.

“It is a very professional set-up. All the girls and the management have given their full commitment and we need to stick together now and push it on.

“Hopefully we’ll get something for all our effort at the end of the year.”

Kerry are winless after two games, although they have faced both Cork and Dublin.

Herron admires the ladies from the Kingdom and she says Donegal have always had trouble against them.

She cited the championship fixture between the sides in 2014 as a missed opportunity, and recognises that it’s time they came out on top against Kerry.

“They have always been a tough team to play against.

“We’re due a win against them. We played them a few years ago in a qualifier and lost after extra-time.

“I think we kind of took them by surprise that day, and we should have beaten them in sixty minutes, but we ran out of steam.

“They are one team that we haven’t been able to beat over the last six or seven years.

“They have some very athletic girls and some fine footballers.

“But we’re looking forward to testing ourselves against them. If we keep our concentration and play well for the full match, hopefully we can get something.”