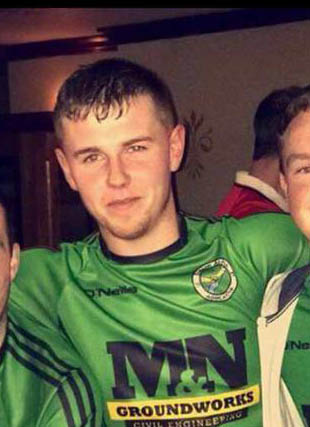 If you were throwing a party and you could invite anyone in the world, dead or alive, who would you ask around? Kevin Hart for the laughs.

Where do you like to go out to celebrate after a big victory? Dixon’s Meenlaragh to listen to Paddy Cannon’s great vocals.

Which character in any film are you most like? Kuno Becker who played Santiago Munez in the movie Goal.

Any odd items in your kit bag? Not sure. It never gets cleaned out – you could find anything in there.

Who’s the biggest joker in the team you play for? Ciaran McGeady insults everyone.

Which team mate has the best looking other half? I’ll not answer that. There would be a few men after me if I did

Who is the worst/best trainer? Ryan McFadden doesn’t miss much to be fair, but Kevin Mulhern is definitely the worst. Barely goes and when he does he can barely run after the warm-up.

Who spends most time in front of the mirror in the dressing room? Darren McGeever. You’d swear it’s a fashion show every Sunday.

Who’s the best/worst person to sit beside on the team bus? Paddy Cannon would be a good man to sit beside.He keeps the craic going. Ciaran McGeady would be the worst, always falling asleep on your shoulder after a late one the night before.

Who has the best and who has the worst diet on the team, and what does it include? My own diet wouldn’t be bad, eat plenty of fruit and rarely eat rubbish. Paul Sweeney and Eamon Cannon would have the worst diet. They love away days for the takeaway after.

Best or worst quote you’ve heard, either from a manager, player, opponent? ‘Prepare for glory lads’.

Best manager you’ve ever played under? Kevin McFadden. He pulled a treble out of us in his first year managing,

Best ever performance? Tough one to think on. I’d say against Keadue last year to win the league, but it was the team performance that day.

One to forget? Rathmullan three years ago. Conceded a last minute goal to throw away the league.

When you were playing in the back garden, who did you pretend to be? Henrik Larsson – the man was a genius

If you were in charge of transfers, who’d be in and who’d be out of the team? I wouldn’t take anyone in. It’s hard enough to make the team as it is!